The Art of “Expectation Management”: Weekly Market Review From Blofin

The recent hype about market expectations is the main reason for the current price fluctuation of cryptos, but it has little impact on the performance of the derivatives market.

Investors have priced in some worst-case scenarios as the market has overreacted. Although the scope for price increases has been further limited, the price floor has also risen as investors’ expectations have recovered.

The impact of the new round of central bank policy communiqués is expected to be limited, and investors are ready for a “soft landing” in prices.

At the same time, geopolitical changes have replaced the contradiction between inflation and interest rate hikes quickly and become the new theme of the market. The hype of European and American politicians about the war crisis in Eastern Europe has led investors to sell more risky assets and choose to buy commodities such as gold, crude oil, and natural gas, pushing the gold price to more than $1,860 at one time.

However, with the gradual agreement between Europe, the United States, and Russia, the crisis in the European region seems to have proved to be a “false alarm”, which has promoted the recovery in a short term, and the crypto market cap has once again rebounded to around $2T.

Attitudes in the options market have also become relatively positive due to the temporary relief of the “war crisis”. The skew curves of the front-month options have risen rapidly again, which means that many investors have bought call options. However, judging from the curve shape, they are relatively more likely to make short-term speculation through options. 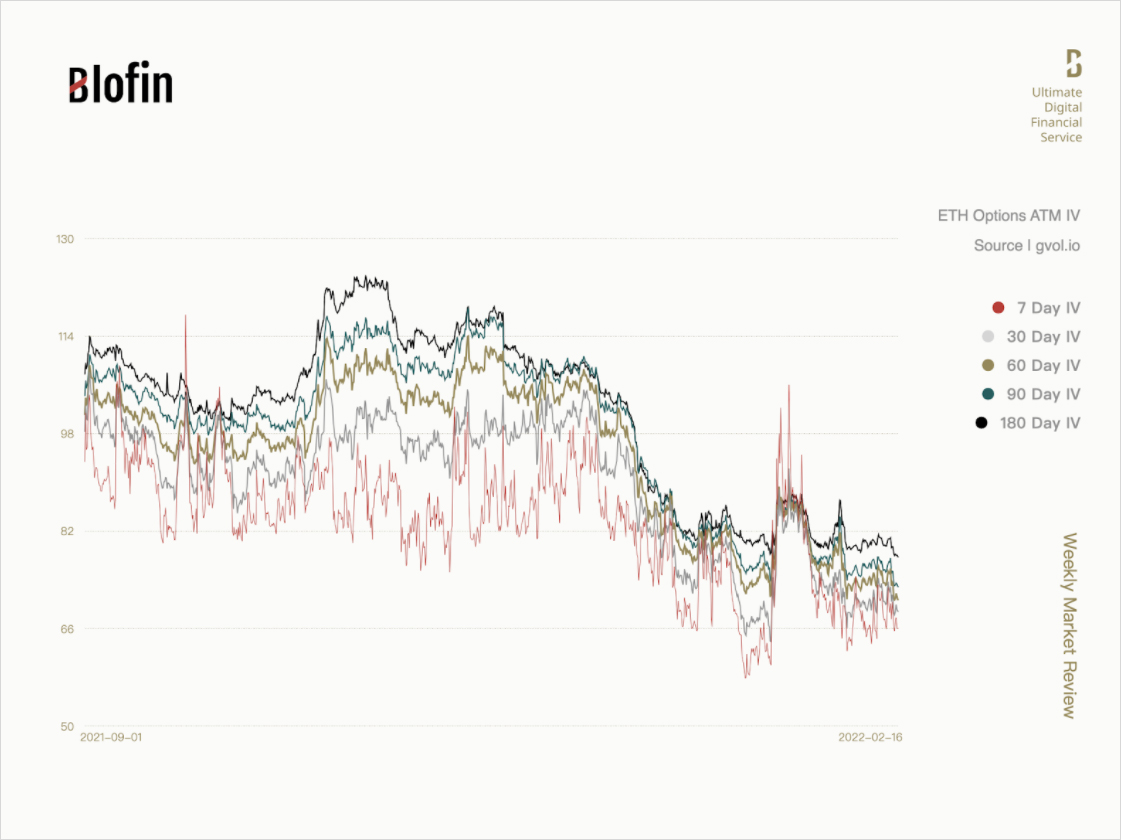 The “outrageous” negative premium of front-month futures has disappeared in the futures market. At the same time, the level of far-month futures premium has also risen slightly due to the boost of market confidence. However, as interest rate hikes and inflation expectations are still the main themes of the market in the medium and long term, the term structure of futures premium is still at a low position. 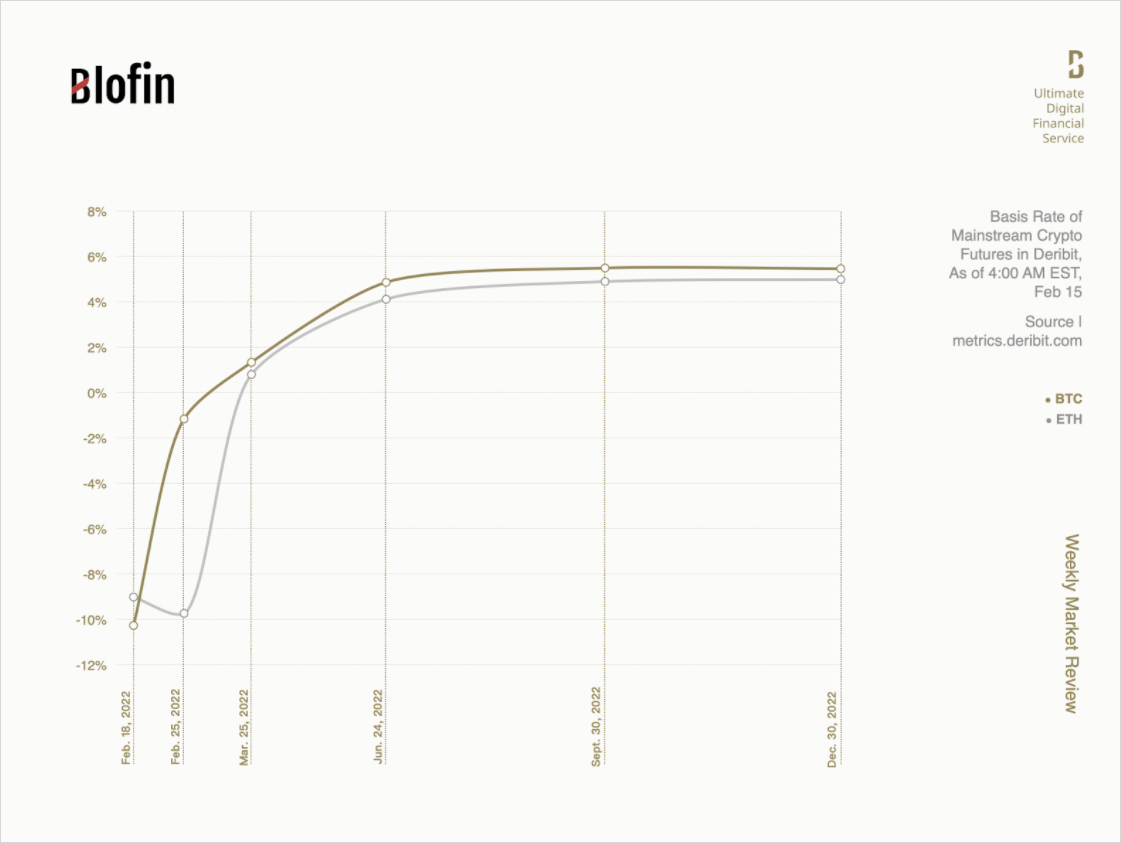 “Expectation management” led by the Federal Reserve and followed by central banks has lasted for more than half a year in capital markets. The long-term market stimulus has led investors to overreact to the Fed’s expectations to reduce the possible losses caused by economic changes. At the same time, many investors also hope to take this opportunity to speculate and profit from it. This “overreaction” has accumulated to this day and eventually even caused a backlash against the central bank’s policies.

However, Investors have quickly priced in the possibility of something worse and have fully prepared to deal with at least five and at most seven consecutive interest rate hikes. As one of the countermeasures, last Thursday, the swap rate market thought the target federal funds rate would rise to 1.12% after the June meeting and 1.34% after the July meeting, more than 100 basis points above the current natural rate of 0.08%.

At the same time, the European Central Bank’s rhetoric has also begun to turn hawkish, tending to raise interest rates in 2022. The simultaneous actions of ECB and Fed have caused bond yields to rise across the board: the yield curve of U.S. treasury bonds has flattened rapidly, and the interest rate of short-term treasury bonds has increased quickly. The yield on German government bonds has rebounded to the level before the start of quantitative easing in Europe.

Even if tensions in Eastern Europe affect bond trends in the short term, bond yields may continue to rise as investors begin to pay more attention to the fundamentals of inflation and interest rate hikes, far exceeding the expectations of central banks, which brings another risk – recession.

Generally, short-term Treasury rates rise because investors see an increase in economic risk in the short term. The current threat is that the central bank will take more radical measures to curb inflation, inhibiting economic recovery and eventually entering a “stagflation” situation.

In this case, the European Central Bank has chosen to reassure the market, while the Federal Reserve has not yet stated its position. However, this is not bad news for the crypto market. As one of the markets most responsive to macroeconomic changes, the pricing process in crypto market seems to have ended early. A large number of short volatility block trading records have begun to emerge in the options market, which means that the performance of mainstream cryptos is already within the expected range of the derivatives market.

Moreover, further information suggests that bond traders overpriced the Fed’s hawkishness. Even if the Fed acts in line with bond traders’ predictions, a high-interest-rate environment will be challenging to sustain for a long time. In the eurodollar futures market, some traders have begun to bet that the Federal Reserve will start cutting interest rates again by the end of 2023.

To sum up, perhaps a bear market is inevitable, but whether the central bank or investors, their management and trading behaviors for expectations will eventually stabilize the fluctuation of the market during the liquidity contraction, bringing enough “soft landing” space for risky assets.

On Feb 16, the Fed will publish a new FOMC meeting note. At the same time, the European Central Bank will also post an economic bulletin the next day, and several Fed directors will announce more details about economic and monetary policies on Friday. However, considering that investors have already included the “worst-case scenario” in their pricing in advance, it is difficult for the Fed to conduct more unexpected measures. The performance of cryptos may stabilize in February until the interest rate hike officially arrives in mid-March.