As each of these positions (at least partially) offset each other, it is a common misconception that there is zero liquidation risk when holding a futures spread position. Unfortunately, this is not the case, as it is possible for this type of position to make a loss and even be liquidated, particularly when higher leverage is used. This is also true when the position size of the long and short are identical and applies regardless of whether it is a regular margin account or a portfolio margin setup.

On the 12th and 13th of March 2020, the price of bitcoin dropped sharply. This move was so violent, that it changed the state of the market from contango to backwardation in a matter of minutes.

Let’s look at an example of how a spread position opened just before this drop could go against a trader even though they are both long and short for the same amount.

At 00:00 UTC March 12th, right before the price drop, the prices of the Deribit bitcoin futures contracts were as follows:

For this example our position is to sell $10,000 of the March contract and buy $10,000 of the June contract. We will use the above prices as the entries because that is what was available at this time. This position is essentially just a bet that the difference between March and June will get wider.

Let’s take a look how this position would be performing just 24 hours later.

One day later, at 00:00 UTC March 13th, right in the middle of the second price drop, the prices of the Deribit bitcoin futures contracts were as follows:

Remember our total position consists of these two legs:

Obviously the short on the March contract is doing rather well. With prices now at around $4,485, this part of the position could be closed for a profit of 0.97187187 BTC. 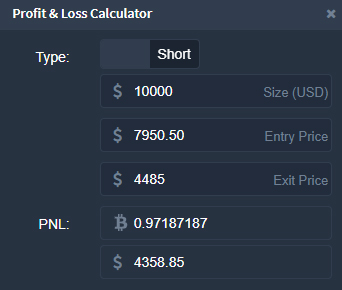 This is the point where some traders have a gap in their knowledge. They mistakenly believe that this profit on the short leg will have perfectly offset any losses on the long leg, because the legs are the same size in USD. However, this is not the case. As you can see here, the long position can only be closed for a loss of 1.12929727 BTC. 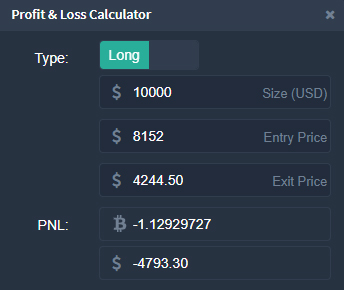 This means that the futures spread position as a whole, has made a loss of 0.1574254 BTC. The size of this loss may come as a nasty surprise to traders who believed they were completely hedged.

Why has the position made a loss?

Other than stating the obvious that the long made a larger loss than the profit made by the short, it’s because the June contract has moved down further than the March contract has. This has caused the spread to move in the opposite direction that we would want for this position to make a profit.

So June minus March not only got smaller, but went from very positive to very negative.

What if I use different contracts, or trade the other direction?

The same principles apply. The difference between any two contracts can move in either direction in the short term, and if the spread moves in the opposite direction that your position needs, your position will have losses. Another common spread strategy that traders like to use is to short the perpetual to capture the funding, and long a dated future to help hedge against price movements. This position is almost identical to the above example and so is still subject to the same risks.

The effect of leverage

As a quick reminder, leverage is the ratio between your position size and the margin in your account that is supporting those positions. So assuming the same position size, the lower the amount of margin in the account, the higher the effective leverage being used.

At the time this position was opened, it could have been opened with as little as 0.026 BTC in the account, if using the maximum leverage possible. It should be clear that any trader that chose to do that, does not have the funds necessary to cope with the losses of more than 0.15 BTC the position racked up over this 24 hour time period. Traders using leverage like this would have been liquidated long before the 24 hour mark.

On the other end of the scale a trader who opened this position while having 2.5 BTC in their account, while also suffering a loss, would not be anywhere close to liquidation.

These are two extreme examples and in reality, traders can choose any point in between. However, the general rule is, the higher the leverage used, (i.e. the less margin in the account to support the same position) the faster the position can be liquidated if the price moves against it.

It is also important to note that as the USD price of BTC falls, the amount of BTC required as margin to support a position will increase.

At the time of writing, the formula for futures maintenance margin requirements in a regular margin account is:

The position size is constant in USD, so fluctuates when measured in BTC as the BTCUSD price changes. This results in more BTC being needed as margin to support an identical USD position when the BTCUSD price decreases.

One day after opening the position, our long on the June contract is still $10,000 in size, but with a current price of $4,244.50 this results in a BTC position size of 2.3559901. This is nearly double what it was when the position was opened. Subsequently this results in maintenance margin requirements of 0.01323548005. Again nearly double what it was previously. Of course this applies equally to the other $10,000 leg that is short the March contract.

So not only has this position overall made a loss, but the amount of bitcoin that needs to be in the account to keep the position open has almost doubled.

During times of extreme volatility like the 12th and 13th March 2020, futures markets are likely to behave in a much less predictable manner than usual. As you can see in the example above, the whole market can flip from contango to backwardation, or vice versa. This does not necessarily happen in an orderly fashion though for several reasons.

When the market is moving at an incredibly fast pace, you will have various market participants doing the following:

This combination of many traders moving quickly out of positions all at once and decreased liquidity, contribute to a situation where the prices of each of the contracts are not moving together in a synchronised manner as they would do on a much calmer day. There can for example be a situation where one minute March is above June, then the next minute it’s the other way round, and then the next minute it flips back again.

You can also get much deeper wicks in price than you would normally get, further accentuating any price differences between two contracts, or between a futures contract and the index. These price extremes will add to the problems of any positions already close to liquidation and can push them over the edge.

When you are managing a spread position, and are therefore both long and short via different instruments, you are of course more hedged than you would be with a naked directional position. However, it is important to be aware that the position is far from risk free.

If the spread moves in the wrong direction, your position will have losses. If these losses cause the account equity to drop below the maintenance margin requirements, the position will begin to be liquidated.

This risk also increases the more leverage the position is using. The higher leverage that is used, the less the spread has to move against you before your losses will cause you to be liquidated.

Futures spreads can be useful and effective positions, but as with any other type of position, it is wise to be fully aware of the risks so you can prepare accordingly.

Solana Options And Futures On Deribit