Deribit has released the ability to create and trade combos in TESTNET. A combo, sometimes referred to as a strategy, are combinations of different instruments that can be executed with one trade/request/transaction.

A combo book is listed as a separate instrument on Deribit. For example, if you want to buy the BTC-31MAR23-100000-C whilst simultaneously selling the BTC-31MAR23-200000-C would require trading the Call Spread. If the combo instrument does not exist, then it can be created (more details on how to create a combo is later in this article). If the combo already exists, then it would be labelled as BTC-CS-31MAR23-100000_200000. This can be considered as an instrument in itself

One would enter orders on this combo book in the same way the enter orders in other books. For example, using the API request private/buy specifying the combo instrument name. Most of the API endpoints and subscriptions for an instrument also work for a combo instrument like ticker or finding the bandwidth (with Max Buy and Min Sell prices)

Combos can be found in the side menu by clicking in the top left corner or by going to TESTNET here.

You will then see 2 tabs with the Combo List and Create Combo:

Note: Implied markets from the legs are not put in the combo order book, nor vice versa. The implied prices of the options legs are shown as an indication on public/ticker and also in the Combo List

Note: Only certain combos are allowed to be created. Below is a list of those combos including the naming terminology

There is a limit to how many combos you can create and you require equity in the account from which the combo is being created. This limit would be to create 5 combos per account in a week – that limit might be adjusted later on.

Using the UI:
Go to the Create Combo tab and start with selecting which combo you would like to add followed by the expiries and, if it’s an option combo, the strikes.

The request above would create a strangle with an amount of 1 on each leg even though the amount in the request is 5. If the direction of both legs were input as “sell”, this would still create a strangle. In both cases, it would result in:

In the API request above, if the direction of the call was set to “sell” while the put remained a “buy”, that would create a Risk Reversal. If the amount on the call was set to a different value than the put, then the combo would not be within the allowed combo types and would return the error “invalid strategy”.

With the UI, one can just see the list of combos and their associated instrument name.

This can also be done through subscribing, ie using public/subscribe. The request on the right shows a subscription to any instrument (outright or combo) for BTC. This subscription could also be just for future combos for example by using instrument.state.future_combo.BTC

The new API endpoints specifically for combos. They are: 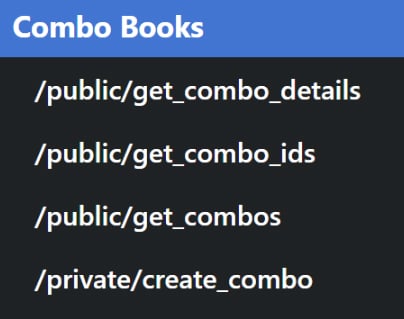 We have already gone through private/create_combo so here is a brief description of the others that are listed here.

public/get_combo_details: This is to just get the name of an existing combo instrument on the platform and to find out the leg details. Looking at the UI, one can easily see the leg details for this Call Condor

And this information can also be retrieved via the API:

public/get_combo_ids: This is to get the combo instrument names and can be filtered for just active, inactive or rfq:

public/get_combos: This would simply return all active and rfq combos on platform under that currency and includes the leg details of each combo:

In the UI, one can send an rfq on a combo by simply clicking the RFQ button in the RFQ column in the Combo List. We will also add the same functionality to RFQ via the UI as for outrights (ie from right clicking on the combo to get the context menu with RFQ or by clicking the “Request Button” on the top right of the order form for that instrument)

Via the API, an RFQ on a combo works the same as an RFQ on an outright (with private/send_rfq and specifying the instrument name). There is a limit to the number of times a day this can be used and the account making the rfq requires Equity. The direction and amount that the user wants to trade can be specified in the rfq but is not compulsory. A user who specifies a direction and an amount is not forced to trade in that direction nor with that amount. It is indicative only.

The best way to get notified of RFQs via the API would be to subscribe to rfq.{currency} and this could be done for all currencies by using “any” or could be specified for a currency:

The rfq state is for 30 seconds, but all it does is broadcast the interest to trade to the market. There is no change in the trading dynamics of the instrument during an rfq.

Note: When a combo is created, it automatically goes into RFQ

The FIX Combo and Request For Quotes (RFQ) functionality on Deribit is similar to the described above REST/WS API. The detailed tags/fields of the request is described int the FIX specification on the docs.deribit.com portal. Here we describe briefly the logic.

As to the RFQ functionality, currently Deribit supports only auto-complete RFQ model. There were added following FIX messages, which provide possibility to get snapshot or subscribe for the existing quotes as well as to send new quotes:

We are the best resource for Crypto Derivatives trading. Deribit is not available in the United States or other restricted countries.

1 November incident report and next steps