The recovery in the crypto market is related to a brief rebound in investor sentiment after the interest rate hike, but it lacks sufficient motivation. Judging from the performance of the derivatives, bearish sentiment is still dominating the crypto market.

As economic data continue to improve, the threat of radical measures by the Federal Reserve seems to be becoming a reality, which is relatively bad for risky assets and crypto markets.

Reversals often happen in the journey of liquidity contraction. When the Fed’s interest rate hike is settled, and the impact of conflicts in Eastern Europe gradually diminishes, investors’ risk appetite has risen statistically significantly. After the stock market continued to rally, the crypto market did not stop, and the market cap of the whole market once rebounded to $2.15T, the best level since early 2022. Among them, the price of BTC once recovered to more than $48k, which made investors begin to expect a “return bull market”: the $50k seems to be around the corner. 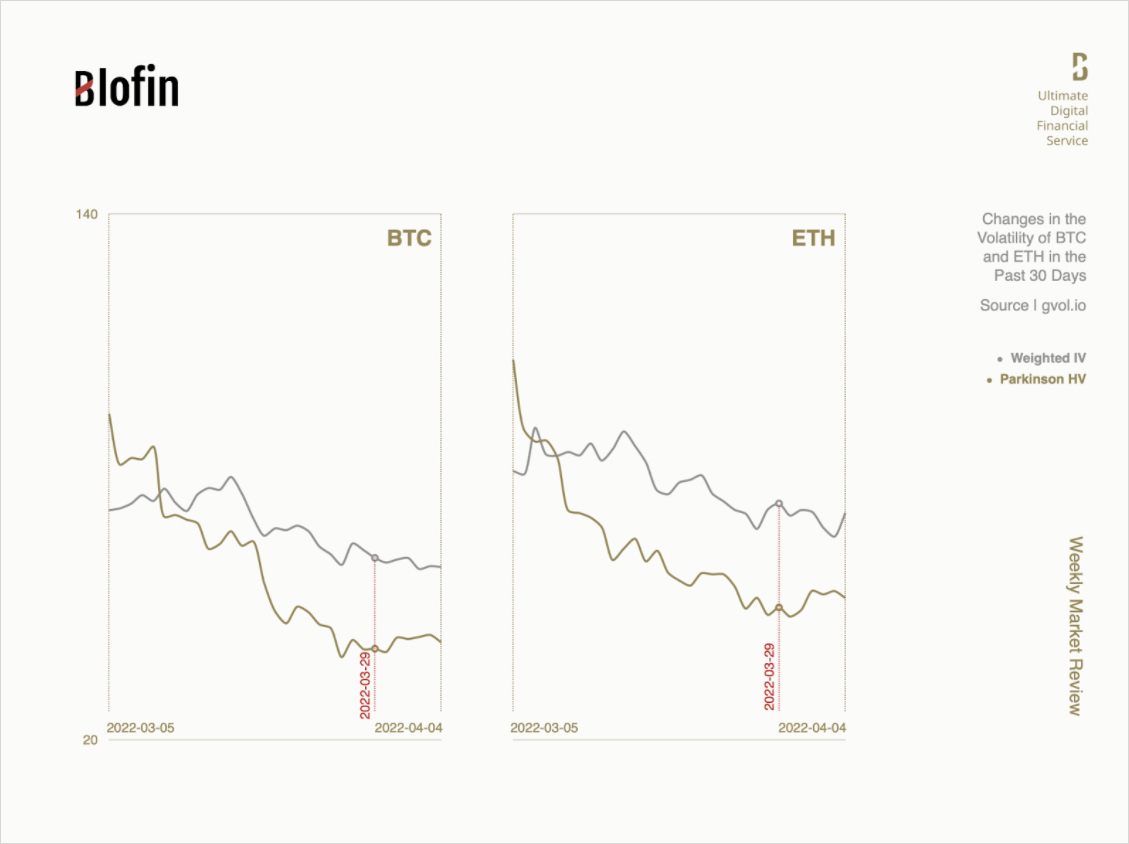 Sentiment in the futures market also seems to be warming further. After a lapse of two months, the average annualized premium of far-month futures on the Deribit exchange has regressed to more than 6% for the first time, while the premium of front-month futures has also rebounded to more than 2.5%. The premiums between futures and spots have reshowed a relatively statistically significant gap. Investors are beginning to have some bullish expectations and are willing to pay a premium. 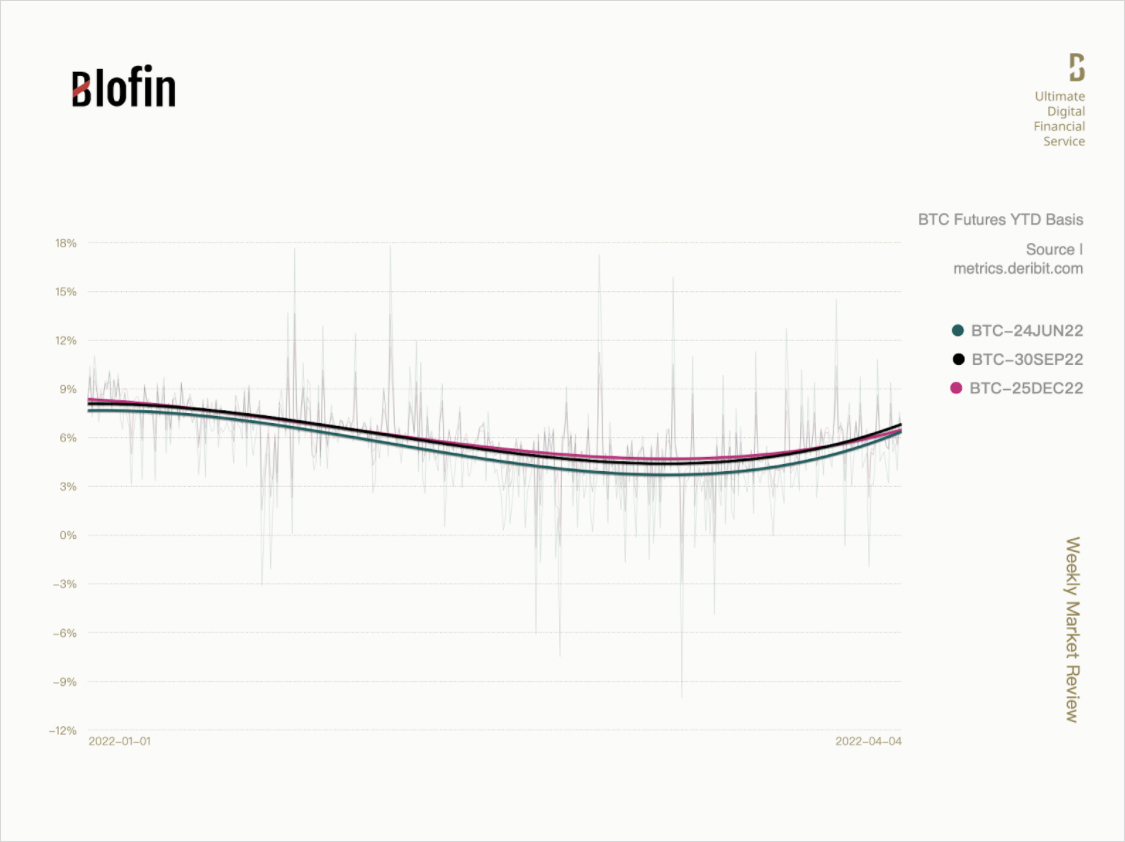 The attitude of investors in the options market has also begun to undergo a statistically significant change. Starting from March 17, the skew of far-month options rose continuously and stabilized near 0 at the end of March, reaching market neutrality, which means that the long-term bearish sentiment in the market that has continued since late January is finally temporarily over. In contrast, there are still relatively more short-term and medium-term bearish investors, so the skew of front-month options remains below 0. 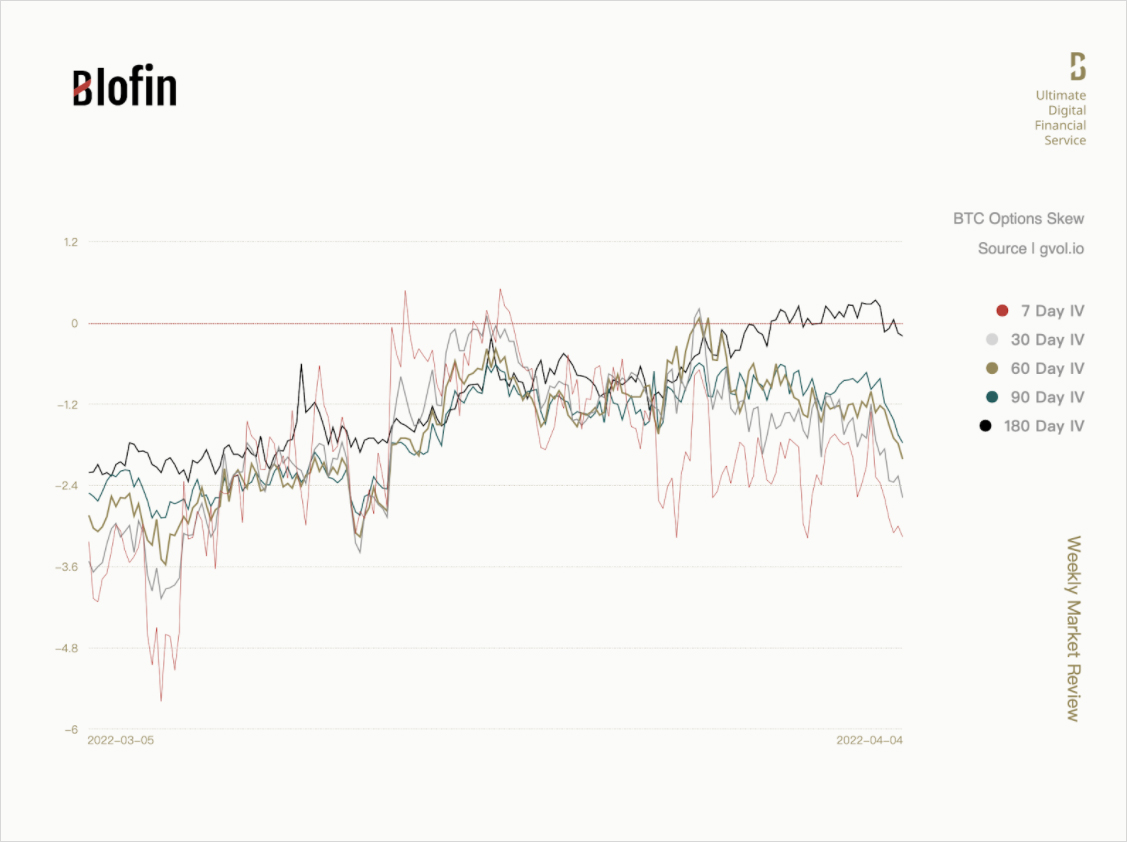 However, although the current price performance of mainstream cryptos has been at the best level since the beginning of the year, some hints of “not enough support for the rise” can still be found from the perspective of volatility. Due to the lack of sufficient spot buying and weak neutral market sentiment, the price changes have not triggered an overall rise in volatility. 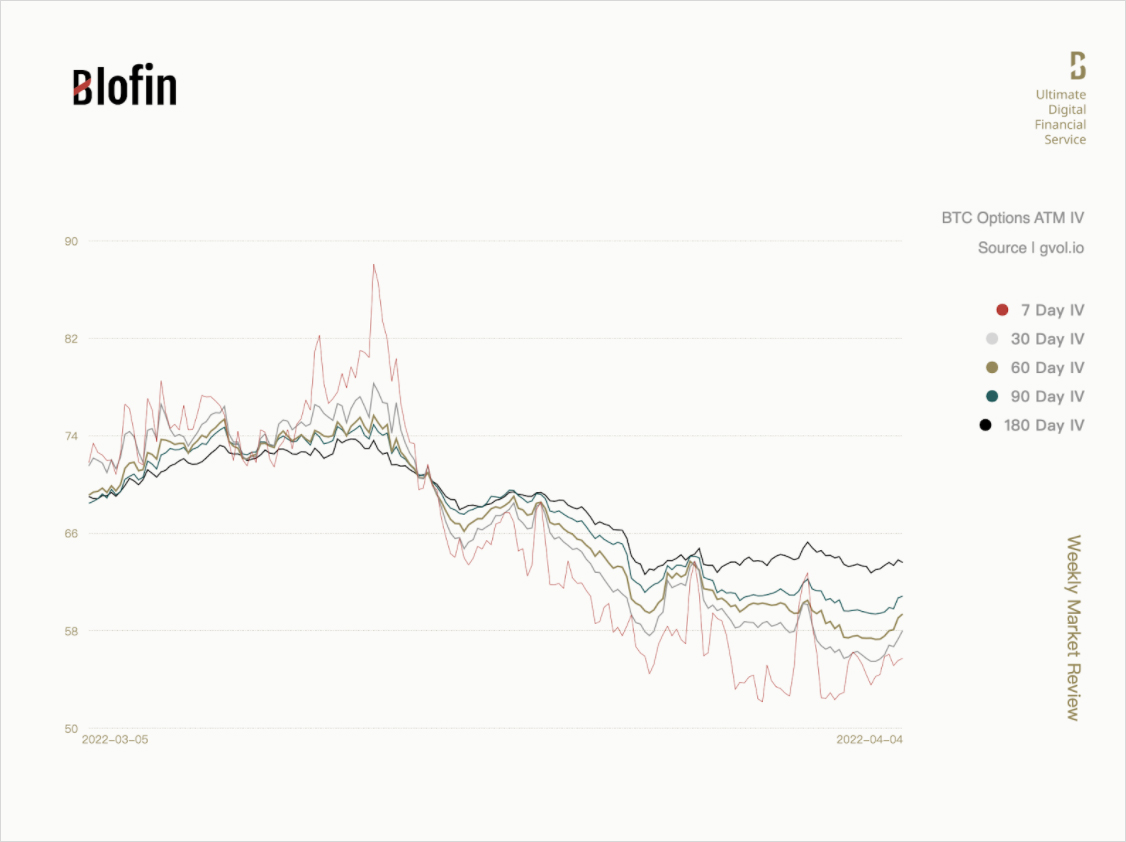 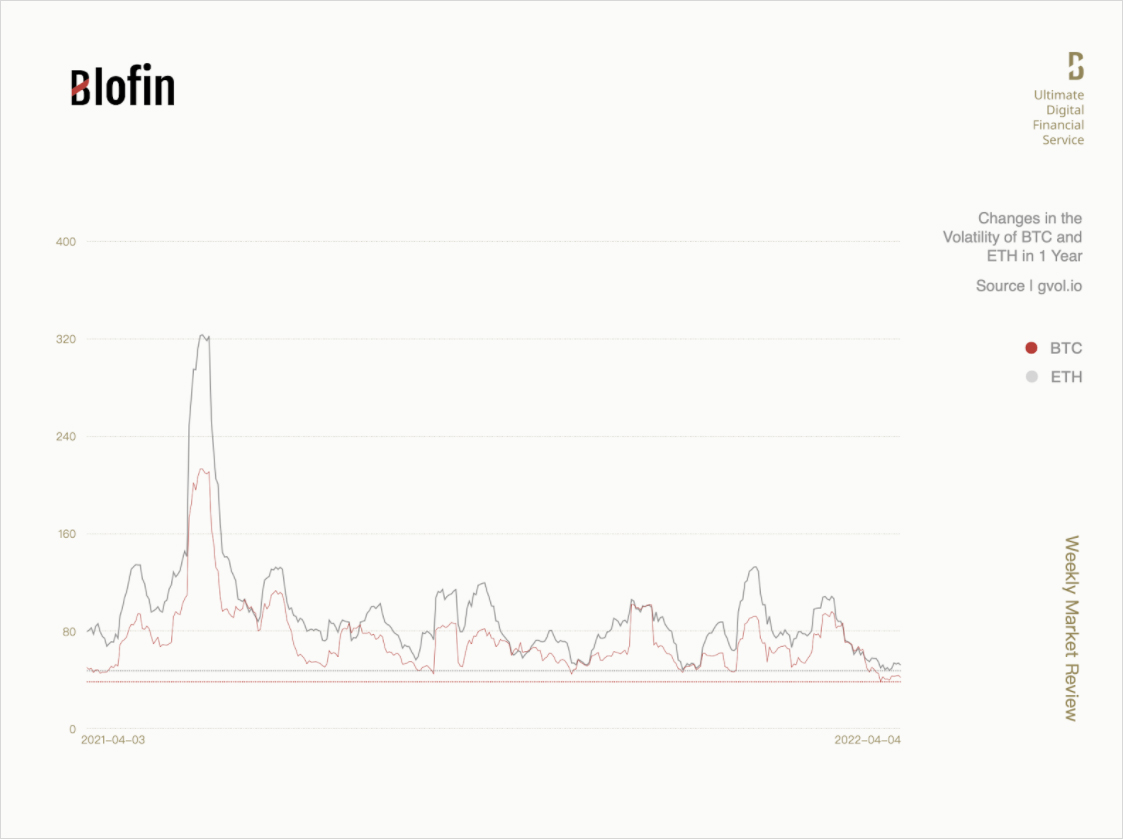 The breakout gains around the end of March did not last long. Like the Indian summer, people’s hope of a bull market has not changed the market cycle. Because the US economic data generally performs better than expected, the Federal Reserve has become more confident to raise interest rates and accelerate the shrinking of its balance sheet. As investors’ enthusiasm retreated, the prices of mainstream cryptos began to slowly correct.

After the release of ADP data, PMI data, March unemployment data, and non-farm payroll data, all out-expected data indicate that the US economy has returned to normal. As a result, Federal Reserve has gained enough confidence to raise interest rates by 50 bps at the May FOMC meeting.

However, economic normalcy has only returned to the US. In Europe, because of tensions in eastern Europe, commodities price rises led to statistically significant price increases and depressed companies’ incentives to produce. The European Central Bank has no other choice: it can only raise interest rates and bear the corresponding economic consequences, namely “stagflation”. 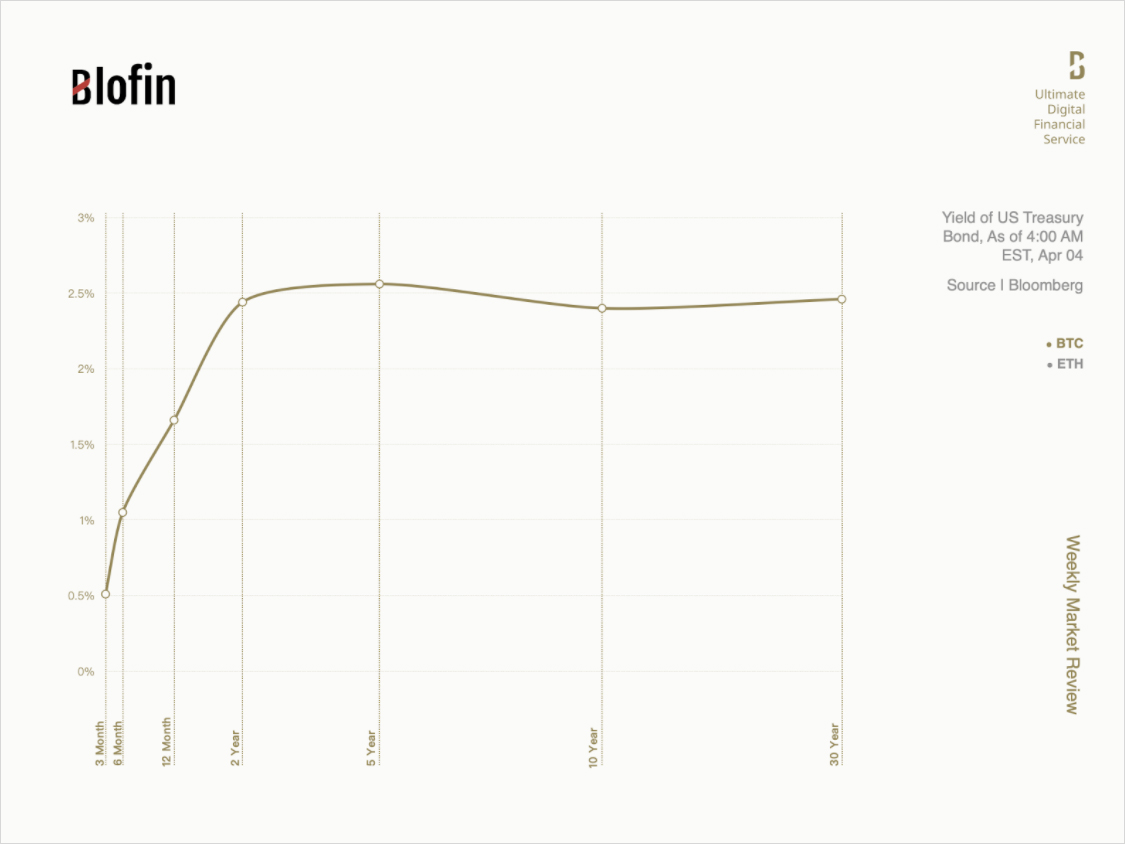 The above has exacerbated the divide among crypto market investors: many people think that the Federal Reserve and the European Central Bank will “surrender” under the pressure of the economic recession, but more people believe that the Federal Reserve will remain hawkish. The number of people who hold the two views seems to be roughly equal, making mainstream crypto asset prices fluctuate around a fragile equilibrium point, providing an opportunity for some professional investors who are good at gamma strategies.

It is worth mentioning that the risk of recession and “stagflation” may give European Central Bank officials pause. Still, the Federal Reserve is almost impossible to “reopen the door” for risky asset markets. “Stagflation” in Europe may slow the decline in crypto prices, but it cannot stop the fall. Given the recent attitude of US regulators towards the crypto market, if there is too much “stubborn” liquidity stuck in the crypto market, US regulators may say something if necessary to accelerate the impact on the market and force liquidity to return to the Fed.

Still, the Fed has no shortage of rivals. Interest rate cuts across East Asia, hoping to attract capital, have been used to expand liquidity and stimulate the economy. JPY has fallen to its lowest level since 2015, while wages in Japan did not rise following the JPY’s decline.

The above is similar to the situation in October 2021, with the Japanese still facing intense inflationary pressures. Given the somewhat anti-inflationary nature of cryptos, the increase from East Asia may offset some pressure on crypto markets caused by the Fed’s tightening of liquidity. In addition, some possible applications of cryptos in commodity trading in Russia and the development of the NFT market will also reduce the net liquidity withdrawn from the crypto market.

These forces make the cryptos less likely to plunge, but it may not prevent the price from falling, and it is also difficult to push the price up sharply. We cannot predict the price direction, but this situation undoubtedly opens up a favorable condition for option sellers: the low possibility of a plunge/surge means that the crypto market will remain at a low volatility level for more time. The lower the price, the more support cryptos will gain; this is the “warm winter” of the crypto market.

April has come. Let’s look forward to what new opportunities the “warm winter” will bring to crypto investors after the Indian summer ends.
The March meeting notes between the Federal Reserve and the European Central Bank will focus on next week. Although liquidity tightening has happened, the contraction path will be an essential factor in determining the medium and long-term performance of the crypto market. In addition, several Fed officials will also give speeches next week on various aspects such as inflation, economic policy, and monetary policy, which may provide some clues for the further policies of the Federal Reserve.