Tranquility in the Eye of the Storm: Weekly Market Review From Blofin

After a sharp drop on Dec 4, Bitcoin prices remained basically unchanged at a low level, while ETH fell more than 3% from last week.

The calm in the market is limited to price. From the perspective of volatility, the volatility of the crypto market continues to rise.

Major capital markets such as Australia and Canada were ready last week for the Federal Reserve to speed up debt reduction and raise interest rates ahead of schedule. After the Federal Reserve’s resolution next Thursday, central banks such as Britain, Europe, Switzerland and Japan will also announce their December interest rate resolutions one after another. With liquidity contraction seemingly a foregone conclusion, the crypto market may continue to face high fluctuations, and the repricing for the medium and long-term performance of cryptos seems to have quietly begun.

Last week, the crypto market experienced a rare calm. Mainstream crypto prices have not changed much, and as the FOMC meeting of the Federal Reserve has not yet arrived, the attitudes from the central banks of Australia, Canada and other countries as well as the trends within the crypto market have become the few foci of investors concerned.

Judging from several countries that announced interest rate resolutions and related economic policies last week, although the inflation problem is still serious, officials do not want to excessively stimulate the economy, so they have not considered raising interest rates. However, considering the impact of the Fed’s accelerated debt reduction on liquidity, there may eventually be an adjustment in the bond purchase plan – that is, “shrinking the liquidity margin”.

In addition, the Federal Reserve’s attitude has received some supports from economic data: the number of jobless claims in the United States hit a new low since 1969 at the beginning of the week, indicating that the economic recovery has achieved remarkable results. Although inflation reached a new high in November, it also seems to have begun the process of “marginal contraction”. The Fed has no reason to let inflation continue at this time.

For investors in cryptos, Fed’s attitude means that the upper limit of asset pricing may be further lowered. Worries about the downward performance of cryptos, worries about the early interest rate hike by the Federal Reserve, and the new uncertainties brought about by the outbreak of the new Omicron epidemic have caused the short-term bearish sentiment to continue. The historical volatility of mainstream cryptos is at a relative high of more than 100 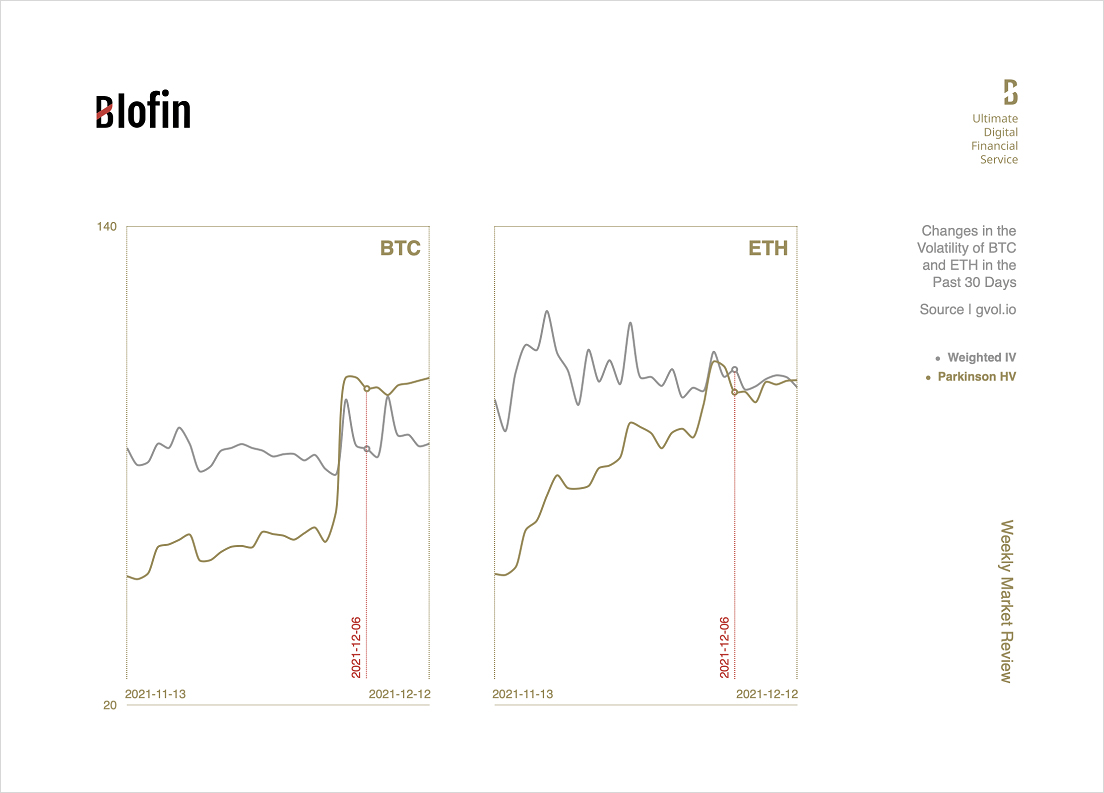 Under the influence of bearish sentiment, the trading of put options has become more frequent. Put options’ premiums were once significantly higher than that of call options, and the option skewness in the market has also decreased significantly. The skewness of forward BTC options was once maintained below 0-The last similar situation occurred 6 months ago. 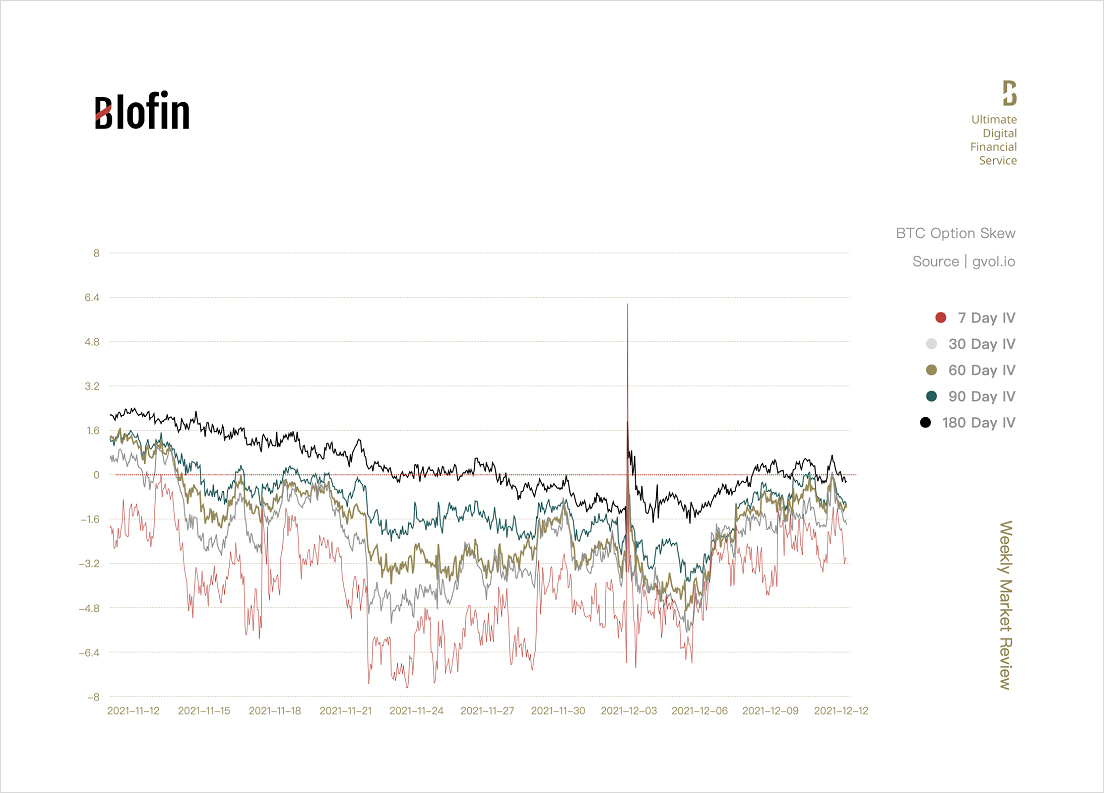 From the perspective of the futures market, investors seem to have recovered from short-term panic and pessimism, but they are more cautious in judging the future market. At the same time, a series of influences from future Fed policies are gradually being included in the pricing. Although the premium of BTC front-month futures returned to normal levels and even rose, the forward futures premium has declined to a certain extent. Besides, ETH futures pricing is relatively conservative, and its front-month futures premium has been less than 4%. 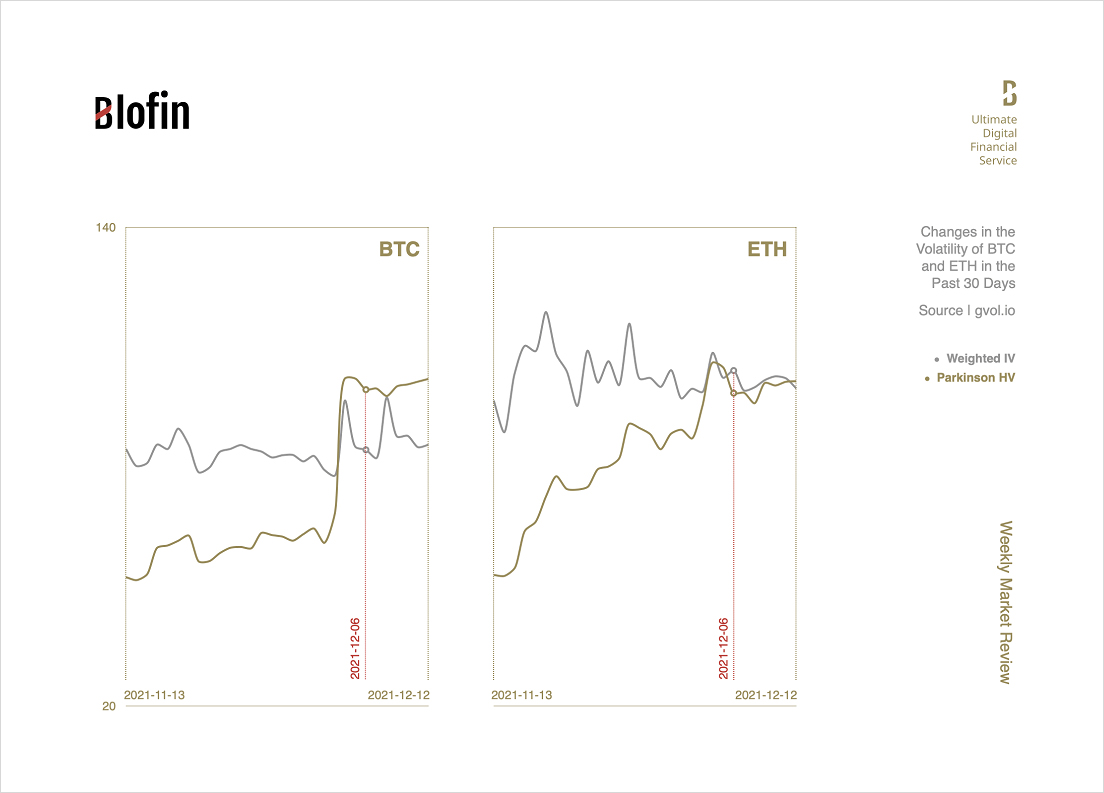 However, other capital markets are not planning to follow the Fed’s lead.

The European Central Bank has already denied the possibility of raising interest rates in 2022. It may only adjust the scale of debt purchase to meet economic demand and will not have a significant impact on the existing liquidity. For crypto holders, Europe’s attitude may be good news: although the Federal Reserve intends to shrink liquidity, liquidity from other markets can still provide basic support for the crypto market.

With the coming of “Central Bank Super Week” in December, the different attitudes and behaviors of central banks in interest rates and economic policies have undoubtedly increased the uncertainty in the crypto market. For risk speculators, long volatility may be a good choice. However, for most ordinary holders, it may be better to take certain hedging measures in a highly volatile environment and wait until Dec 16 before doing anything. Enough is as good as a feast.