Under the combined pressure of the poor macroeconomic environment and the institutional liquidity crisis in the crypto market, the overall performance of the crypto-asset market has remained near the lowest level since the beginning of 2021, and the bearish sentiment is unlikely to change for the short time.

BTC faces greater downside risks than ETH, and the additional pressure from investors’ heavy buying of put options is one of the reasons.

From mid-June to the present, the crypto market has officially entered the second stage of the bear market: institutional bankruptcy and liquidation, which is what some economists called the “LTCM moment”.

To be honest, the crypto market’s current situation is somewhat similar to the capital market in 1997-2002. Let’s look back at what happened that year:

There is nothing new under the sun. The end of the bull market in the crypto market and the collapse of the top projects have caused enormous losses for some institutions that invested in and lacked hedging. The previous over-leveraged arbitrage and investment made it difficult for these institutions to pay interest on their previous cost of debt expansion. Eventually, some institutions declared bankruptcy, and other institutions that funded them struggled with bad debts. In just a few months, giants turn to dust—like LTCM 20 years ago. However, the transaction speed is much higher than that of the year, which further compresses this process.

The continuous wave of selling triggered by the liquidation of institutions also had a significant impact on the derivatives market, driving the risk aversion sentiment to remain high for a long time. The inversion of the volatility surface is one manifestation of risk aversion. Investors piled into short-term puts to hedge against the downside, pushing the put/call ratio as high as 2 at one point and pushing short-term implied volatility higher than long-term volatility. 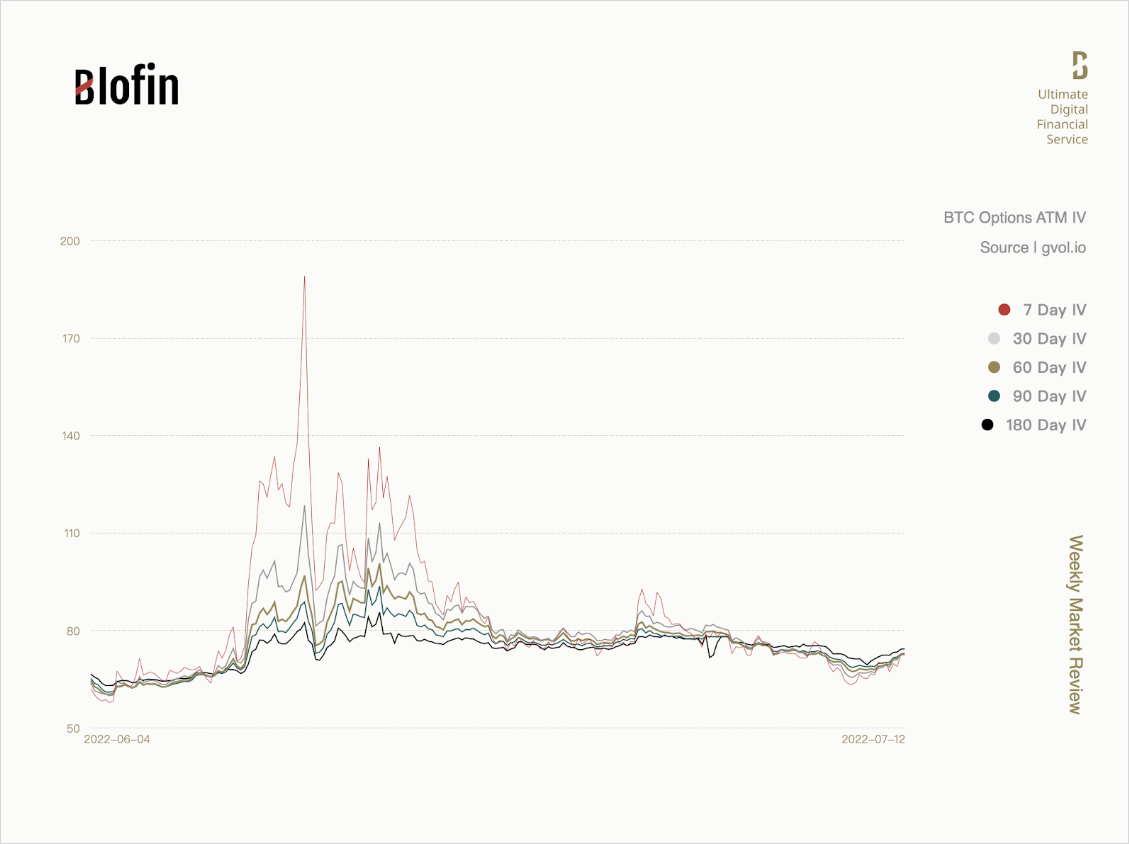 Notably, exposure to ETH is well controlled – at least from a gamma exposure perspective. However, exposure to BTC is not effectively controlled. Persistent negative gamma exposure means that any hedging by option sellers as prices fall will generate additional selling pressure, further pushing up the overall risk level in the crypto market.

Unlike economic policy’s impact on volatility, the risk-off effect triggered by institutional bankruptcy lasts longer. From the beginning of 2021 to the present, the continuous effect of economic policies on short-term fluctuations usually does not exceed two weeks; however, with the support of the risk aversion effect, this round of volatility surface reversion has lasted for nearly a month. Given that there is still no shortage of macroeconomic shocks in July, volatility surface inversion is likely to continue.

Let’s turn the clock again to the end of the last century. Many investors and analysts believe that the current situation in the risk asset market is similar to 1994: the same sharp and rapid rate hikes, the same rising Treasury yields, and the same commodity bull market.

However, the current environment the Fed faces is entirely different from that in the mid-1990s: inflationary pressures have already exploded, and interest rate hikes have little effect on controlling inflation; U.S. debt is approaching the brink of inversion, and recession is imminent; except for East Asia, other advanced economies are facing intense inflationary pressures, and recession risks threaten almost every major economy in the world. In addition, the stock market is falling from its highs, and geopolitical tensions are negatively impacting the economy. Interestingly, all the above also happened around 2000.

Faced with the above situation, what did Greenspan do? Familiar hike. However, during that rate hike, the “soft landing” cost for inflation and unemployment was a “hard landing” for risk asset markets.

The premise of Greenspan’s overall “soft landing” of rate hikes around 1994 was based on low inflation and a relatively strong economic environment in the early days of the end of the Cold War. At the same time, the “Internet Revolution” is still in its prototype stage, and the core support of the risk asset market still comes from traditional industries. Therefore, the impact of interest rate hikes on risk asset markets is limited.

However, although the rate hikes around 2000 temporarily stabilized the economy, and the Federal Reserve cut rates in early 2001, this round of hikes had far-reaching effects on risk asset markets: it took the S&P 500 7 years to return to previous highs, while the Nasdaq took 15 years. 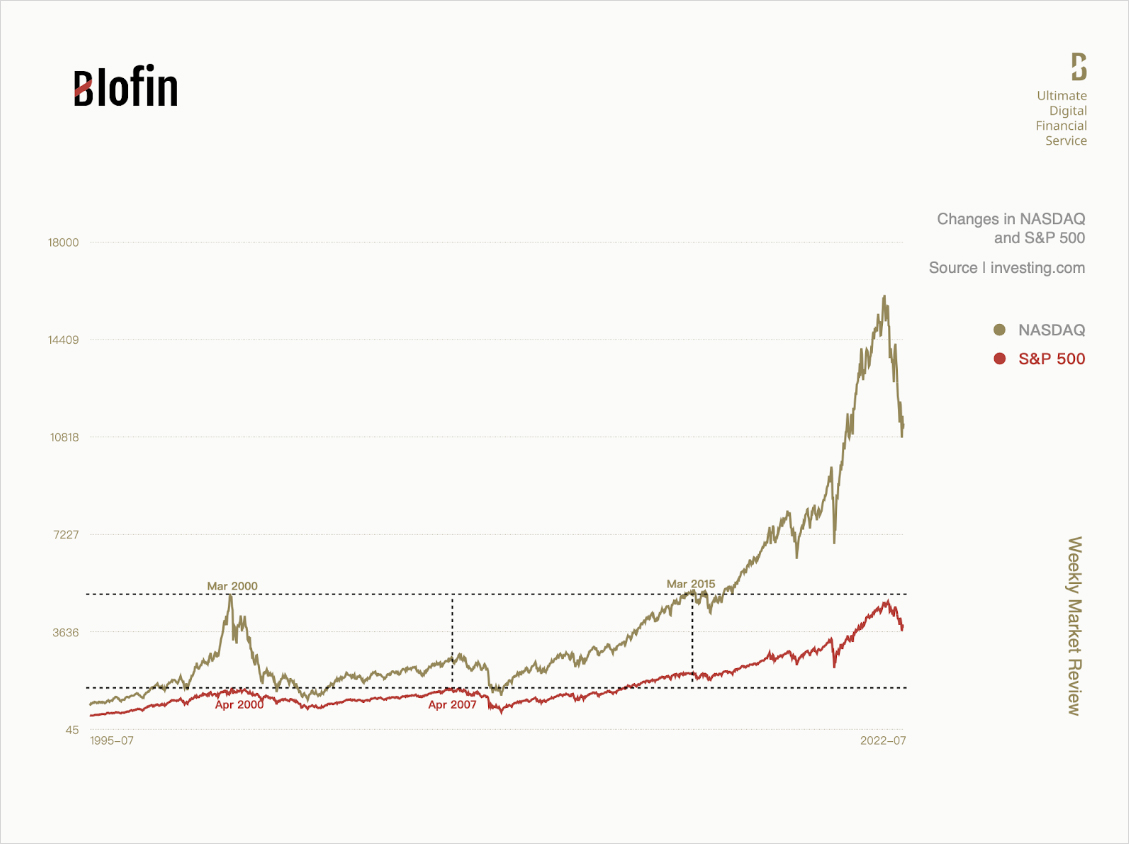 Another indicator that can compare the current situation to the early 2000s is the U.S. Dollar Index (DXY). During the liquidity contraction in 2000, the U.S. dollar index rose, reaching a high in early 2002. At this time, investing in the U.S. dollar and U.S. bonds can get ideal returns, which corresponds to the general bear market in the risk asset market.

From the second half of 2021, the U.S. dollar index has also risen and accelerated after the official implementation of the liquidity contraction policy. The U.S. dollar has once again become an ideal investment target. When the risk-free returns are high enough, it is difficult for investors to pay attention to the venture capital market.

It is worth noting that interest rate cuts have a certain delayed effect on the risky asset market, especially for the relatively subordinated risk asset market, because liquidity tends to return to lower-risk assets first and then return to high-risk assets. Think of the Nasdaq back then; today’s investors look at crypto-assets similarly. If the expected return of the crypto market is not performing as well as the dollar, they will not put their money in immediately until the relative return of the crypto asset reaches an “acceptable” level.

In summary, although investors have long expected that the Fed will adjust its policy under the pressure of recession, a “hard landing” has become a reality for the crypto market. The good news is that whether it is the interest rate hikes by central banks or the bankruptcy liquidation of institutions, their impact on the market has been priced to a certain extent.

After the interest rate hike in July, the crypto market may gain a certain respite in August, but considering the historical experience from Nasdaq, the recovery of the crypto market has not yet begun. It may take longer from the current low point to the all-time high.

Weekly Market Review From Blofin: Recession Has Arrived; When Recovery?