In this week’s edition of Option Flows, Tony Stewart is commenting on Large players took advantage of Dec100k, BTC bounces and aggresive Call buying in 52k-72k.

2) Significant % closure thought to be bilateral with original CP. Other LPs had opportunity to price, but the CP was axed to unwind ATMs.

Other short-vol players anticipating the unwind disappointed – IV has squeezed higher since.

3) Inventory shift to upside 52k+ adds to large OI.
This is where tension now lies, all-be-it seemingly a mighty distance away.

4) Impact of the trade is to shift significant risk (CP delta + gamma +P&L) from the ATM strikes.
The remaining positions ATM are big but not outsized.

The Gamma impact will therefore be less, and will further diminish as the end of Jan approaches….unless BTC breaks new highs.

5) Because Implied Vol is so high, the probability of reaching what appears out of reach right now, is not dismissable.
Breaking 52k by the end of Jan priced at 15%+ chance.

Easy to conclude 52k+ end of Jan is too high for sane men to envision. Then a 5k bounce +surge from the lows and the clouds part…above is clear blue sky.

Interesting to note:
a) OI suggests not all ‘The One’ buyer; possible copy cats + spooked short-covering.
b) Aggressive buying stopped as BTC fell <37k; reduces ‘he knows something’ speculation.

Due to option dynamics, don’t need to breach strike, but as expiry nears, Theta could manifest into ancient Greek ‘death’.

5) With 10d RV 125%, additional intra-day significant intraday swings and large buying of options, this forced MMs to snap up any initiated selling flow (profit-taking Jan40-44k Calls).
Volumes were focussed in Jan, but the RV+IV squeeze dragged up the rest of the term-structure. 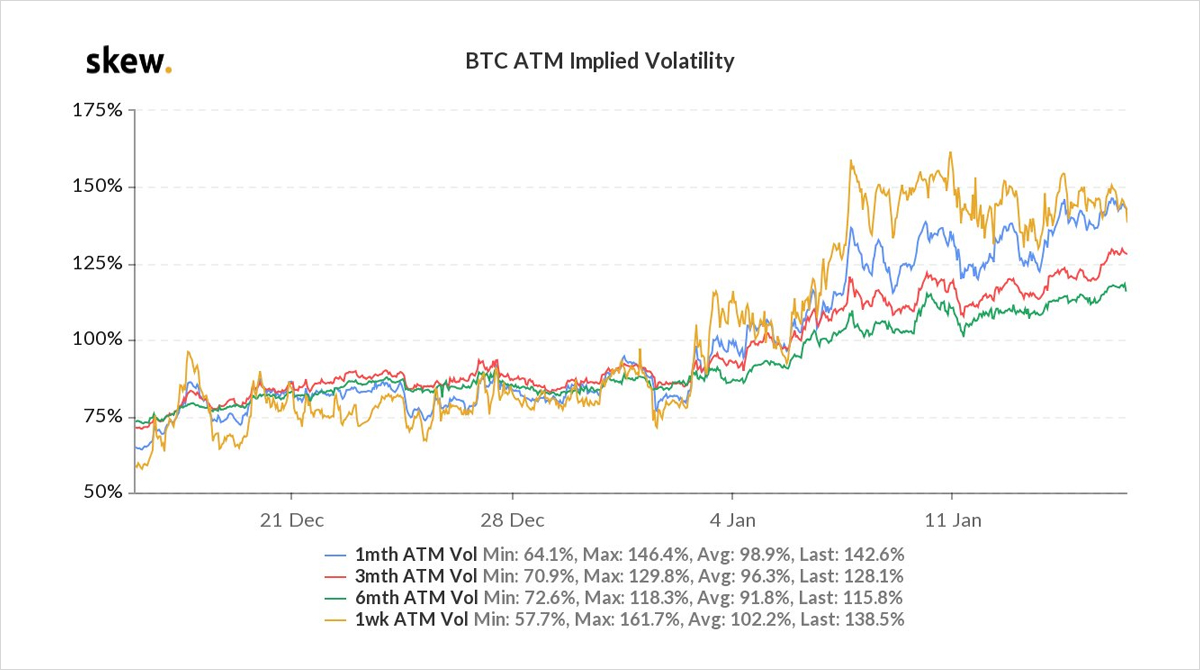 6) No initiated active pre-weekend dump of Theta-decay for longs; ample opportunity in natural trading, so IVs remained at highs until the end of Friday.

Only a quiet Saturday so far and an absence of aggressive buyers has allowed the near-dates to soften and Jan-Feb roll-over.