Affected by the more aggressive liquidity tightening policy that the Federal Reserve may adopt, the price of mainstream cryptos has fallen by more than 10% in one week, but the increase in volatility is still relatively limited.

The risk of liquidity crunch brought about by policy changes will be one of the main risks facing the crypto market in 2022.

Next week, while the December CPI data of main capital markets are released, the Fed governors will make intensive statements on the economy and monetary policy, and the volatility of the crypto market may continue to rise as the details of economic policies become clearer.

For crypto investors, the details of Fed’s December FOMC meeting announced last Wednesday were the “last straw” on them. The Fed once again brought forward the expected rate hike to the end of 2022q1 and considered shrinking its balance sheet (for example, reducing its holdings of treasury bonds and mortgage-backed securities) to further collect the liquidity, which further compresses investors’ expectations for the future prices of risky assets, especially cryptos.

After the news was announced, the total market value of the crypto market shrank to below $2T within 24 hours, which is comparable to the level in early October 2021. The persistent low volatility is finally showing signs of ending, with volatility returning to around Christmas levels in the short term, but still relatively low compared to before. 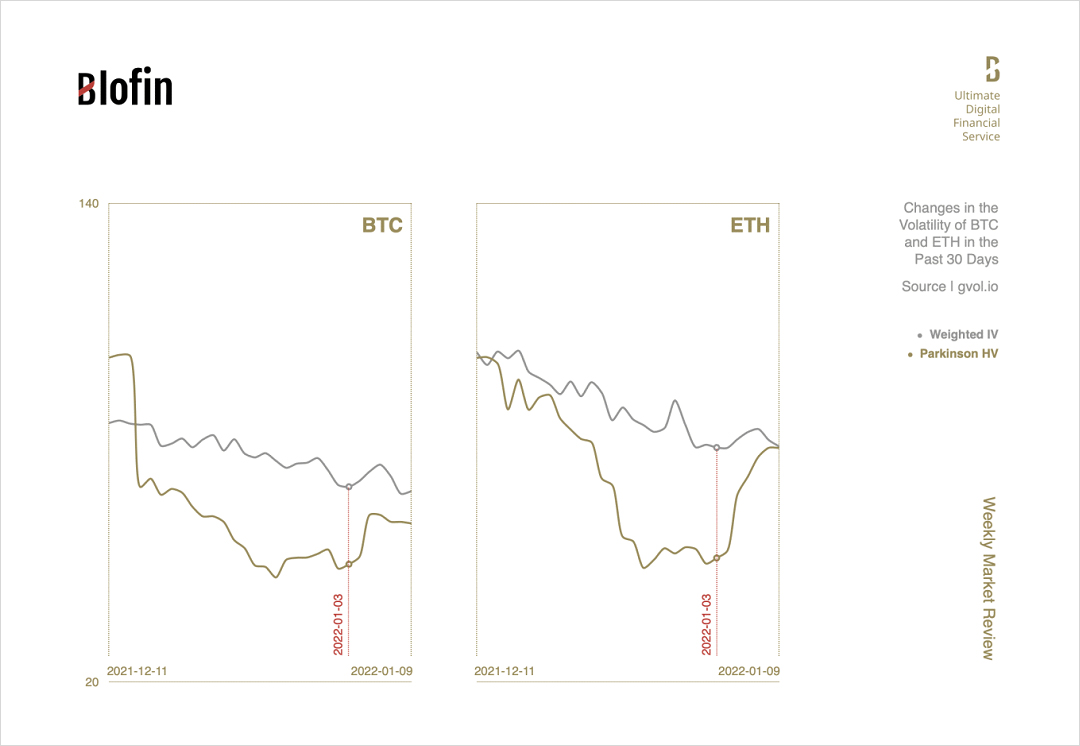 Bearish sentiment spread quickly in the options market. A large number of risk-reversal portfolios and portfolios with put options pushed all of the skew curves below the zero line. The premiums of put options have also increased. 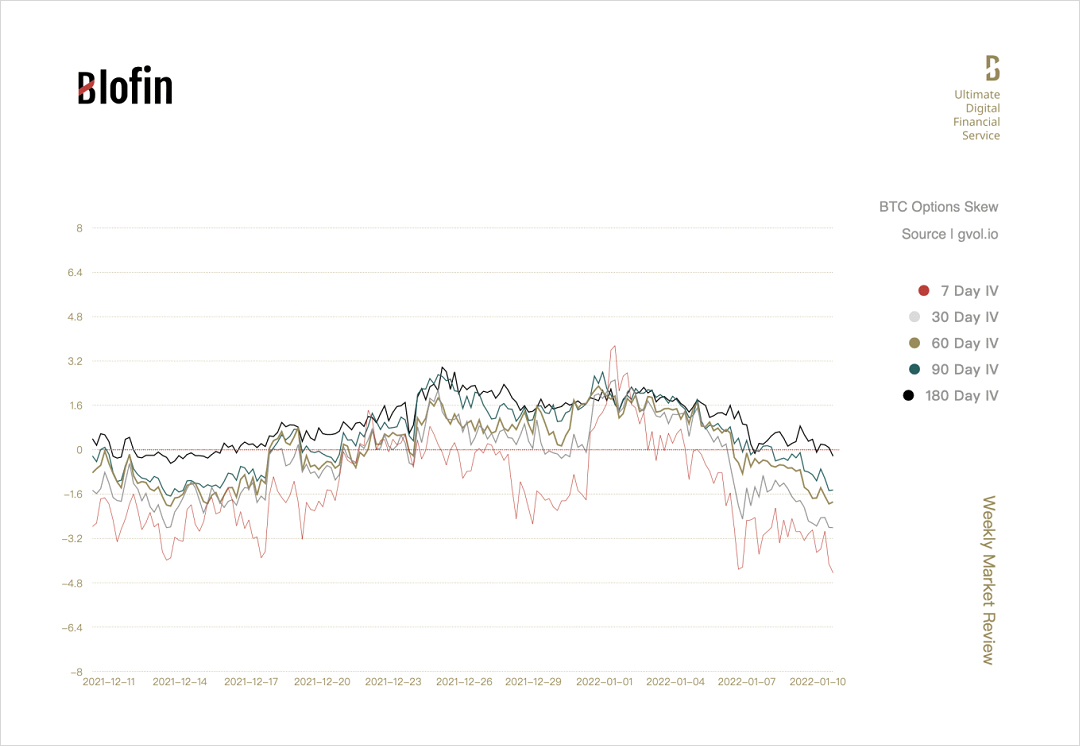 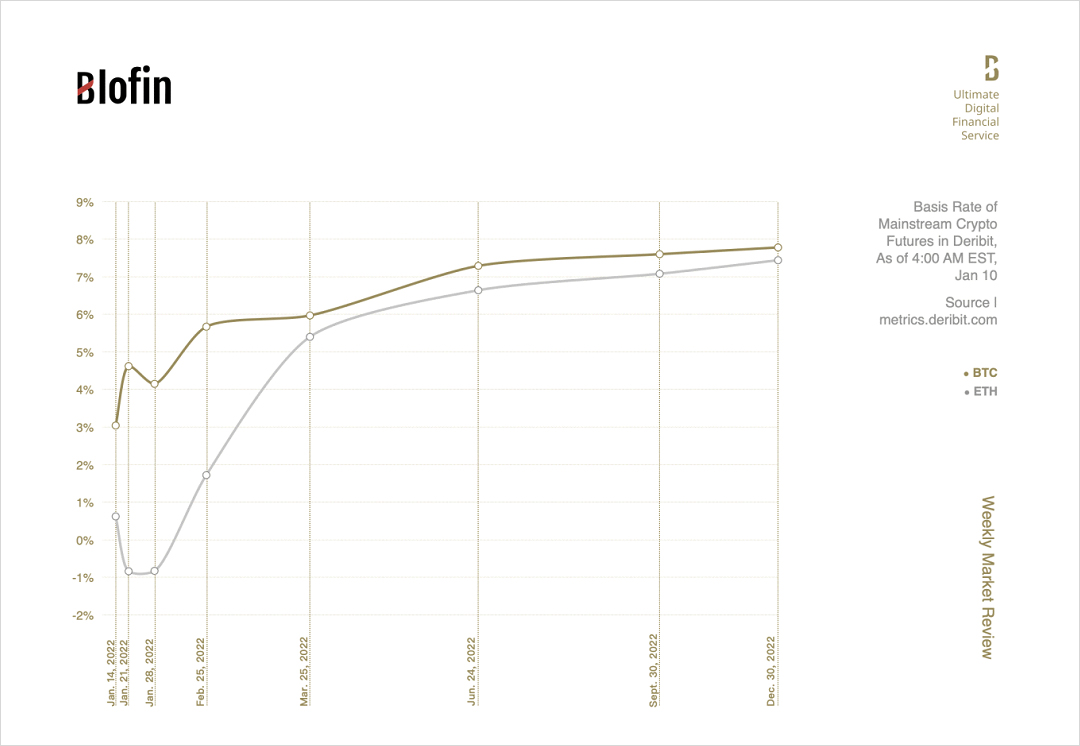 Is a Bear Market Coming?

Whether Arthur Hayes or Alex Krüger, front-line traders are already certain that a bear market is coming. The Fed’s hawkish policy has become more solid. On the other hand, the price ceiling of cryptos from the liquidity contraction has become more and more obvious. Moreover, the liquidity withdrawal from the market of secondary risk assets like cryptos tends to be faster and more violent.

At the same time, regulators have also prepared a series of compliance measures for the crypto market. The U.S. Department of the Treasury will clarify the definition of a crypto broker in January, and clarify who reports customer data to the IRS. This means that in the future, the implementation of tax schemes related to cryptos has been put on the agenda. Given the strength of U.S. taxes on securities and other assets, the impact of taxes on price performance may gradually emerge.

However, does the bear market come too fast?

From the perspective of volatility and price changes, a rapid price drop usually happens with a jump in volatility. However, during this price drop, the change in volatility was moderate. This means that there may be other factors that are fueling the market.

Affected by the recent chaotic situation in Kazakhstan, the Internet problems encountered by miners have seriously affected the security of miners’ assets. The scale of miners’ sell-off due to risk aversion was relatively limited. However, since the crypto market was still recovering from the New Year’s holiday and the trading volume was low, the sell-off still has a greater impact on the price. Fortunately, the impact on volatility is also smaller due to the relatively low trade size.

From this point of view, it seems that we are still some distance away from the “true bear market” brought about by the liquidity crunch. However, the continued decline caused by the news of the liquidity crunch is already on its way as planned. There is no doubt that we have to learn how to adapt to a hard market situation in advance.

The CPI data of main capital markets will be released one after another from January 10. With major central banks increasingly focusing on persistently high inflation, it is only a matter of time before they follow the Fed’s lead. Therefore, the attitude of the Fed governors and the European Central Bank will be the key to the market direction next week. The only certainty is that volatility will continue to rise as uncertainty increases.