The relationship between efficiency, liquidity, and volatility of BTC/fiat markets over Bitcoin’s ten-year history is a case worth examining in-depth. In this article, we focus our attention on the BTC/USD pair on primary spot venues such as Coinbase Pro (GDAX formerly), Bitstamp, Kraken, Mt. Gox, Itbit, and Bitfinex since 2012.

We investigate the counter-intuitive result that while market efficiency has substantially increased over that time period, trading volumes denominated in BTC have actually declined and volatility has remained consistently high. We then discuss similarities of the crypto market structure to that of FX markets.

As expected, market efficiency has been continuously increasing due to the professionalization of cryptocurrency trading. The profitable trading opportunities have attracted well-capitalized arbitrage trading firms from traditional markets. And businesses such as Silvergate Bank and Signature Bank have further contributed to efficiency by banking a network of exchanges and enabling arbitrageurs to instantly transfer fiat between them.

Spot arbitrage has consequently shifted from a strategy achievable by retail investors to a strategy firmly employed by high-frequency market makers.

A daily market arbitrage opportunity is represented as the % difference between the highest and lowest daily close in BTC/USD markets across Bitfinex, Bitstamp, BTC-e, GDAX, Itbit, Kraken, and Mt. since January 2012 to present.

Spot volumes (expressed in BTC) on crypto to fiat exchanges have remained stagnant since the inception even though the circulating supply of bitcoins is constantly increasing.

Daily Spot Volume is an aggregation of BTC/USD volume on Bitfinex, Bitstamp, BTC-e, GDAX, Itbit, Kraken, and Mt. Gox since January 2012 to present.

There are several reasons for this:

KYC vs non-KYC is another component to this trend. Spot exchanges are subject to higher KYC requirements than the leveraged and derivatives exchanges. Users tend to trade more actively when there are fewer obstacles to start trading.

When comparing the order book depth on spot exchanges and derivatives exchanges, we can see that speculators can trade the same notional of BTC back and forth on a derivatives exchange at a cheaper cost of liquidity than on a spot exchange. Leverage and lower trading fees are potent fuel for liquid markets as it increases everyone’s trading power and reduces friction.

With the USD-based stablecoins, such as USDT (Tether), USDC (Centre) and others taking off, significant volumes have also moved from crypto to fiat exchanges to crypto to crypto exchanges. These exchanges do not intersect with the traditional financial system, making them more attractive for many traders. As these exchanges, namely Binance, Okex, and Huobi, have a significant market share, this has distributed spot liquidity between BTC/USD and BTC/USDT markets.

The benefits of OTC trading:

It is now common to see the top brokers quoting 10 BTC position $5 wide, with no commissions. This would be impossible for the client to achieve via trading on spot exchanges.

Below is an example of a price feed of ETH/USD from Tagomi, an aggregator of multiple sources of liquidity, where the price to buy is actually lower than the price to sell, even after including fees. 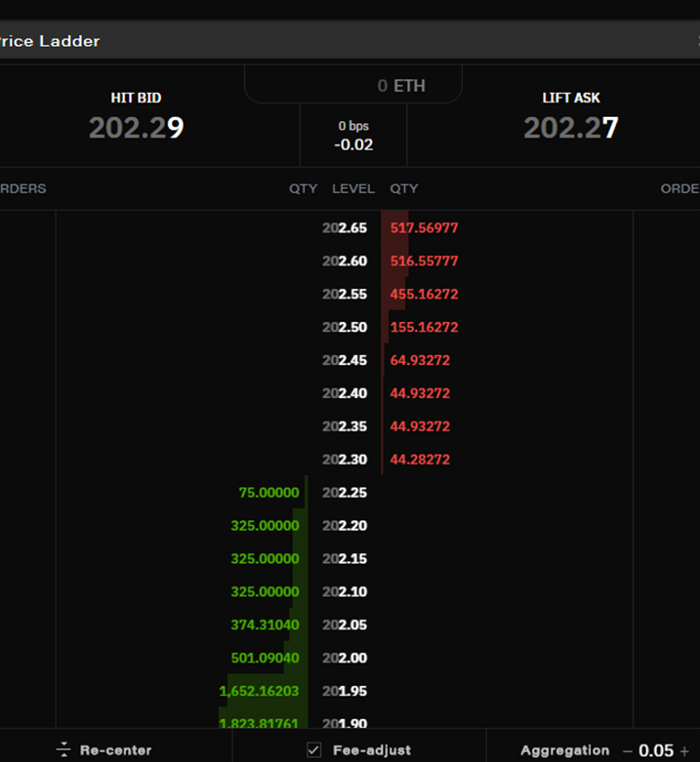 Daily volatility is the % difference between the daily high and low in BTC/USD on Bitstamp.

It is still up for debate if an asset with elastic demand and inelastic supply will converge to a tight valuation range (relative to other asset classes), after sufficiently many Gartner hype cycles. Gold, for example, is still incredibly volatile, almost 50 years after the U.S. eliminated the gold standard. Furthermore, gold has a more elastic supply, as the extraction can be aggressively increased given a higher price. Bitcoin, on the other hand, has a fixed emission schedule, making its supply significantly less elastic than gold.

In the traditional system, fiat currencies are under the influence of government-imposed monetary policies, which are aimed at targeting specific levels of inflation, as determined by a change in the price of a particular basket of goods. If we were to expect Bitcoin to trade in a similarly tight range, this would immediately raise a question of how this mechanism would be imposed — which basket and which country would be used as a benchmark. Due to this, it is highly unlikely that BTC, even when fully monetized, will lose its volatility.

When comparing crypto with other traditional financial markets, crypto markets appear to be more similar to G10 FX markets than to Credit or Equity markets.

In Credit and Equity markets, liquidity and volatility are direct trade-offs. Regulators target low volatility to maintain investor confidence and avoid market panic, which can then lead to contagion. Volume is distributed among a small number of key heavily regulated exchanges. Consequently, markets may even be programmed to halt trading, in cases of extreme price moves. For instance, short-selling was heavily restricted in nearly all OECD countries during the 2008 financial crisis. The table below shows the length and terms of each country’s ban on short-selling from September 2008 to June 2009.

In contrast, the fragmented nature of both- FX and cryptocurrency trading means that there are no central points of market control. While fiat currencies are issued by their respective central banks in a centralized way, direct intervention in G10 fiat-to-fiat currency markets is considered to be outside of their scope. Hence, there are no expectations of low volatility.

Also similar to crypto, FX liquidity has continued to fragment across multiple venues. According to the Bank of International Settlements, market shares of EBS and Reuters, the primary venues for FX trading, has continued to decline from 45% of overall volumes in 2005 to only 10% in 2016. These exchanges can be perceived as an analog to crypto spot exchanges such as Coinbase Pro and Bitstamp. 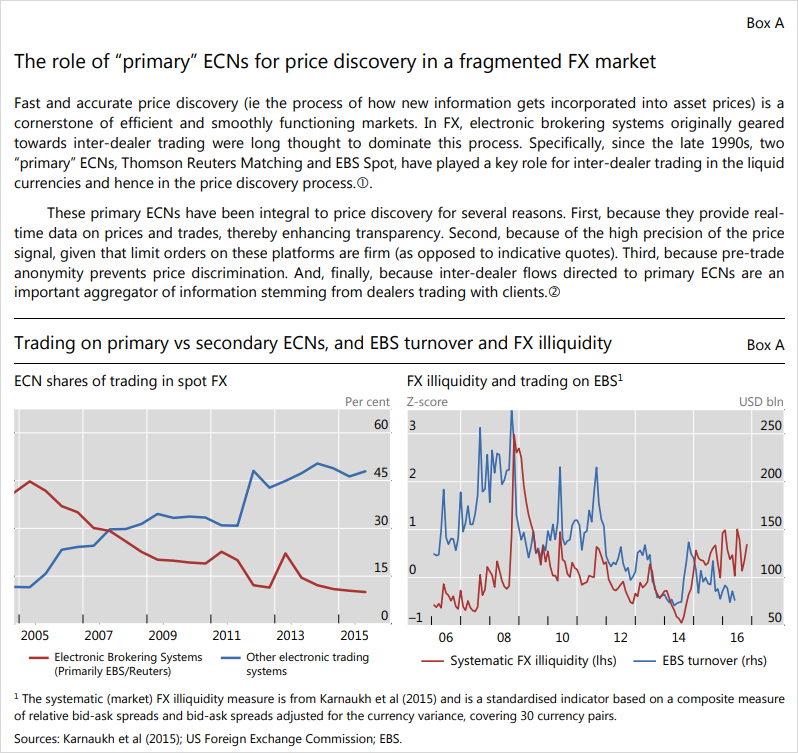 In FX, same as in crypto, OTC brokerages have emerged as significant capturers of value. Clients broadly prefer to rather trade with OTC brokers than directly on exchanges. Brokers can then decide whether to internalize the flow or to hedge with other brokers. There is intense competition to be a top dealer and to achieve a high rate of internalization. Non-bank market makers such as Citadel, Tower Research, and Jump Trading have made significant investments into competing with banks.

Efficiency, liquidity, and volatility are all important metrics, as Bitcoin and other crypto networks mature over time. The crypto market is turning out to be more fragmented and volatile than observers could have ever guessed, however, there are also similarities to the market structure of fiat trading. This supports the idea that people are transacting in Bitcoin as incipient money.