Decentralized Finance (DeFi) applications have made notable headway in the last few years, with decentralized exchanges, margin trading, and money market platforms attracting significant volumes. Options protocols are one of the latest additions to DeFi. Those being built include Opyn, Hegic, OhMyDeFi, and Primitive Finance.

Opyn positions itself as a protection platform, but is at its core an options platform built on “Convexity Protocol”, a generalized options protocol. Convexity protocol is quite malleable – allowing developers to create options with various different parameters such as: (1) European vs. American, (2) Underlying Asset, (3) Call or Put (4) Collateral types, etc. For this article, we will focus on the products currently available in Opyn.

Users currently have the ability to buy and sell American put options on USDC, DAI, and ETH. An American option is an option that can be exercised anytime before contract expiration. 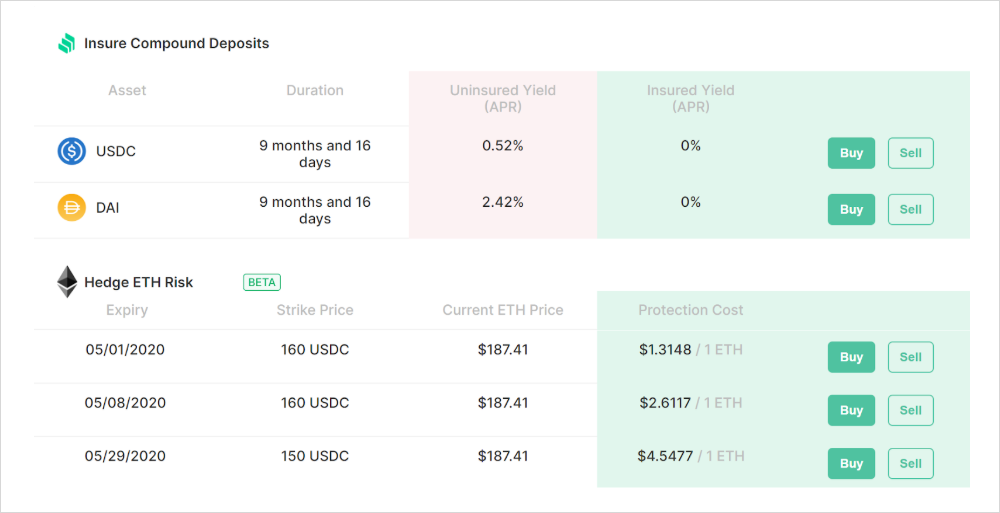 In order for options to be sold, they must first be minted. Options creators will fully collateralize an Option by sending the full value of the strike to a smart contract known as a “vault.”. For example, to mint an ETH put option with 160 USDC strike, a user sends 160 USDC to a vault and receives a token which represents an exercisable put option. Option tokens of the same series (same parameters e.g. strike, expiration, style, etc.) are fully fungible. Their buyers and sellers do not face individual counterparties, but rather the Opyn smart contract system acts as a central clearinghouse.

Once minted, options can be transferred between any Ethereum address. While they can also be traded on exchanges, Opyn options currently only have limited liquidity on Uniswap Exchange. The issue with Uniswap exchange is that it is not an orderbook based exchange, but rather a Constant Product Market Maker exchange. Practically, this means that market makers are not able to set direct bids/asks, and rather are subject to the algorithmic exchange rates produced from current Uniswap liquidity.

Traditional options market makers are constantly adjusting their prices and spreads. They also don’t take exposure to that option until their order is filed. However, Opyn liquidity providers (LPs) on Uniswap must have exposure to both ETH and their corresponding option. This means that LPs are constantly losing money from a combination of theta decay (the loss of value from the passage of time) and arbitrageurs. Buyers/sellers of Opyn options should check the liquidity of their series before entering a position, as liquidity status may make it difficult to exit larger positions.

Opyn is currently exploring alternative exchange and market making solutions. Opyn has so far been able to reach $2M in open interest as of late April 2020, since launching a few months prior. 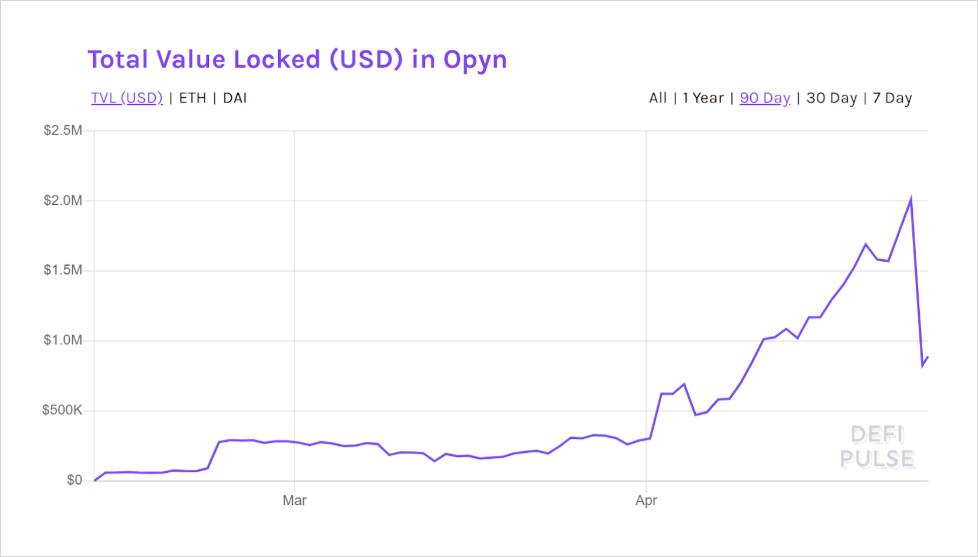 Hegic utilizes a fundamentally different model for option creation, pricing, and liquidity provisioning than Opyn or traditional options trading platforms. Hegic has both call and put contracts which are American options. An American option is an option that can be exercised anytime before contract expiration.

Hegic does not utilize an orderbook based model, but rather a pooled liquidity model. Compared to the UI of a traditional options platform, the UI is incredibly simple. 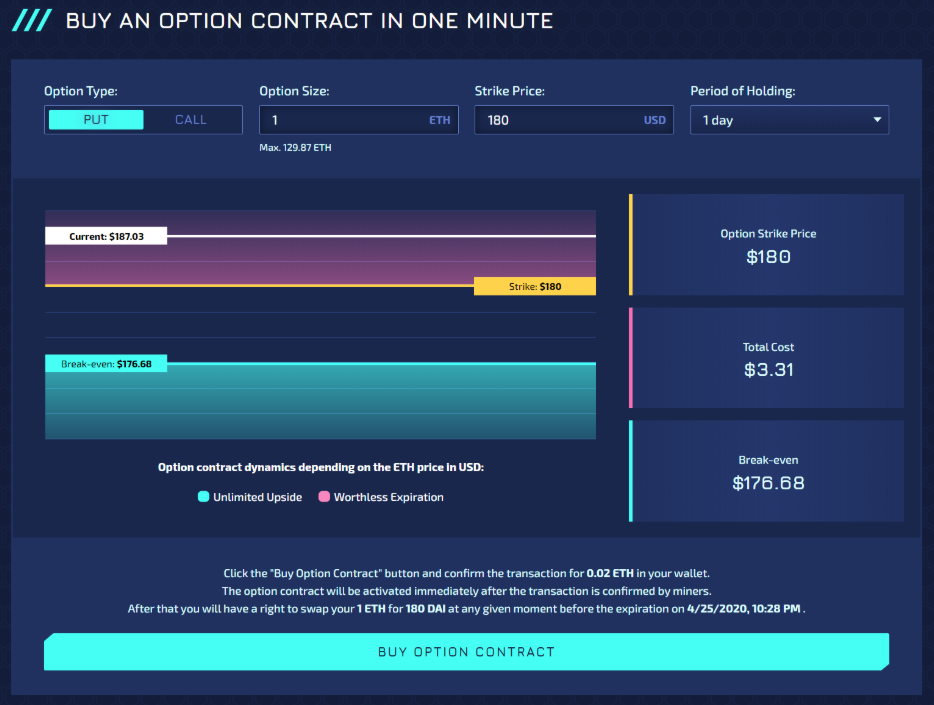 Buyers specify their desired option type (Put vs. Call), volume, strike price, and contract duration and are quoted with an algorithmically determined price. The cost of the contract is a function of current price, strike price, duration, and “Implied Vol Rate”. “Implied Vol Rate” is derived from historical 1M ATM IV (1 Month At The Money Implied Volatility) and is currently a manually updated parameter. Because IV is not dynamically priced in real time by the market, there can be arbitrage opportunities between Hegic and other options venues. 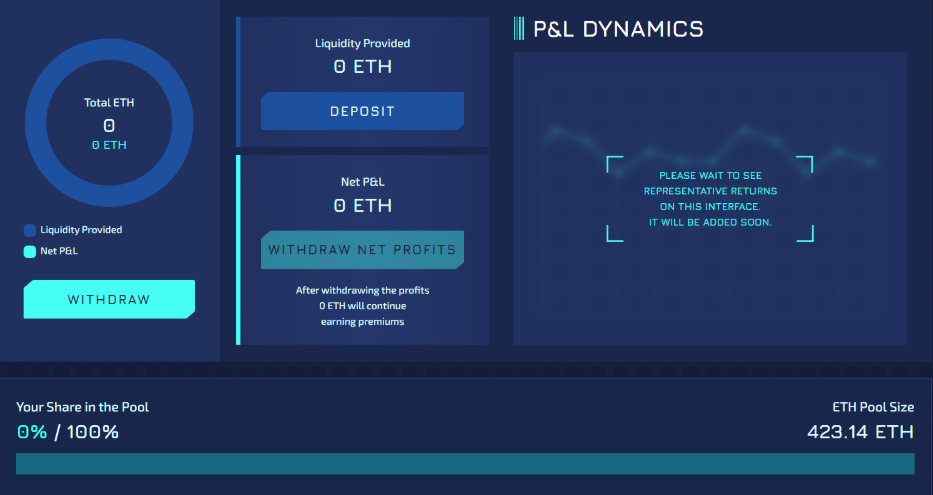 Anyone who wants to be a Liquidity Provider can deposit to Hegic and take on pro-rata exposure to contract writing based on their share of the total writer liquidity. There is a “DAI pool” and an “ETH Pool”, which serve as collateral against put options and call options respectively. They both collect premiums/fees from Hegic option buyers and are also exposed to downside risk incase the price of ETH moves past the strike price at which a contract was purchased. LPs should keep in mind that they cannot control the strike or expiry of options that are written against the pool they contribute to.

The amount of options that can be written depends on the size of the respective liquidity pool. Options writers can utilize up to 90% of the pool’s liquidity, leaving at least 10% available for LP withdrawal.

One caveat with Hegic is that older LPs have a distinct advantage over newer LPs. When new LP shares are created, they only receive premiums from contracts purchased afterwards, but still take on the price exposure of previously purchased contracts. On the other hand, older LPs have their downside risk diluted by newer LPs while keeping the original share of the options premiums that were bought during their tenure. Additionally, LPs can remove their liquidity at any time, taking the profits from premiums paid while relieving themselves from downside risk.

A pooled liquidity has several benefits in liquidity and UX. Available writer liquidity is efficiently used and not fragmented among a multitude of options series each with different strike prices and expiration dates. Instead, all unutilized liquidity is readily available to underwrite any contract. Writers and buyers do not need to wait for orders to be taken, and can instead immediately start collecting premium as a writer, or immediately purchase downside protection for a chosen duration as a buyer. Market makers providing liquidity via sitting limit orders are not required. This is similar to how other pooled liquidity protocols such as Uniswap (Decentralized Exchange) or Compound Finance (Decentralized Borrow/Lend) operate.

Currently, Hegic options contracts are not tokenized and can only be exercised, but not resold. Thus options buyers should be aware that they could face full theta decay of their options cost. A few mechanisms for reselling are currently being discussed, including an options return mechanism with an IV penalty.

Opyn and Hegic being very new platforms still have some features to be desired compared to centralized options platforms like Deribit. One of the most prominent would be the lack of margin. Many centralized options platforms not only only for traders to open non-fully collateralized positions, but also allow them to increase their leverage by delta hedging their portfolio with other options or futures/swaps. This is known as portfolio margin. Additionally, Opyn & Hegic option owners must manually exercise their options.

DeFi options traders are also open to smart contract risk – something that has materialized quite frequently with smart contract applications so far. In fact, during the writing of this article, Hegic’s smart contract was found to have a security issue and an audit report found multiple issues that have since been fixed. On the other hand, there is no risk for counterparty insolvency risk since all positions are fully collateralized. You can find a full comparison of the three platforms below.

The liquidity and pricing dynamics lead them to be more appropriate for retail traders as opposed to sophisticated institutional traders. That being said, they will likely attract some volume from the DeFi & non-custodial crowds.