“When as a young and unknown man I started to be successful I was referred to as a gambler. My operations increased in scope and volume. Then I was known as a speculator. The sphere of my activities continued to expand and presently I am known as a banker. In reality, I have been doing the same thing all the time.”

Every individual in some way is a trader. Each decision made in life offers its counter opportunity, and everyday individuals make thousands of trades whether they acknowledge it or not. A decision to study engineering over finance, or to go to a movie instead of a bar with your friends, is a trade. Long engineering, short finance; long popcorn, short alcohol.

At a high level, one can make an effort to classify every decision as a “trade” and begin to think about all choices in terms of expected value, evaluating a life choice similarly to how one would vet an investment, or decide to buy an option. This is a simplistic view of how to classify actions, but a useful heuristic for understanding the beginnings of separating out different types of decision making.

With this in mind, prior to engaging with any financial markets, every participant can be classified as a “trader” at the highest level. Of course, this is not the generally accepted use of the word trader — in fact many market participants would bristle at the word and shout back, “No, I am an investor!” The history of distinguishing between traders (speculators) and investors is long and storied in the markets, and it is generally accepted that these are distinct concepts.

Joseph Penso de la Vega was the first writer to articulate the difference in his 1688 book, Confusion of Confusions, the oldest book ever written on the stock exchange business. In this book he outlined three types of people: Financial lords (the wealthy investors), the merchants (occasional speculators) and the gamblers (persistent speculators). Joseph’s distinction was one of size and success — the rich are the investors. The rest are speculators.

Philip Carret, author of The Art of Speculation (1930), wrote that “The man who bought United States Steel at 60 in 1915 in anticipation of selling at a profit is a speculator. . . . On the other hand, the gentleman who bought American Telephone at 95 in 1921 to enjoy a dividend return of better than 8% is an investor.” In other words, Carret put more weight on the motive than the action. The speculator here focuses on the price, while the investor focuses on the business.

John Maynard Keynes, the renowned economist, was even more succinct in his approach, defining speculation as the term for “forecasting the psychology of the market” and investment as “the activity of forecasting the prospective yield of assets over their whole life.” His approach was similar to Carret’s but with a small distinction — that betting on the economic success of a company is philosophically distinct from betting purely on the price of an asset.

In reality, these terms lie on a gradient of multiple axes and different situations will carry aspects of both trading and investing based on the criteria. We can parse this out by exploring the criteria that separate the traders from the investors, and running through examples that should get the reader thinking about definitions. The two to focus our energy on are motive and duration. 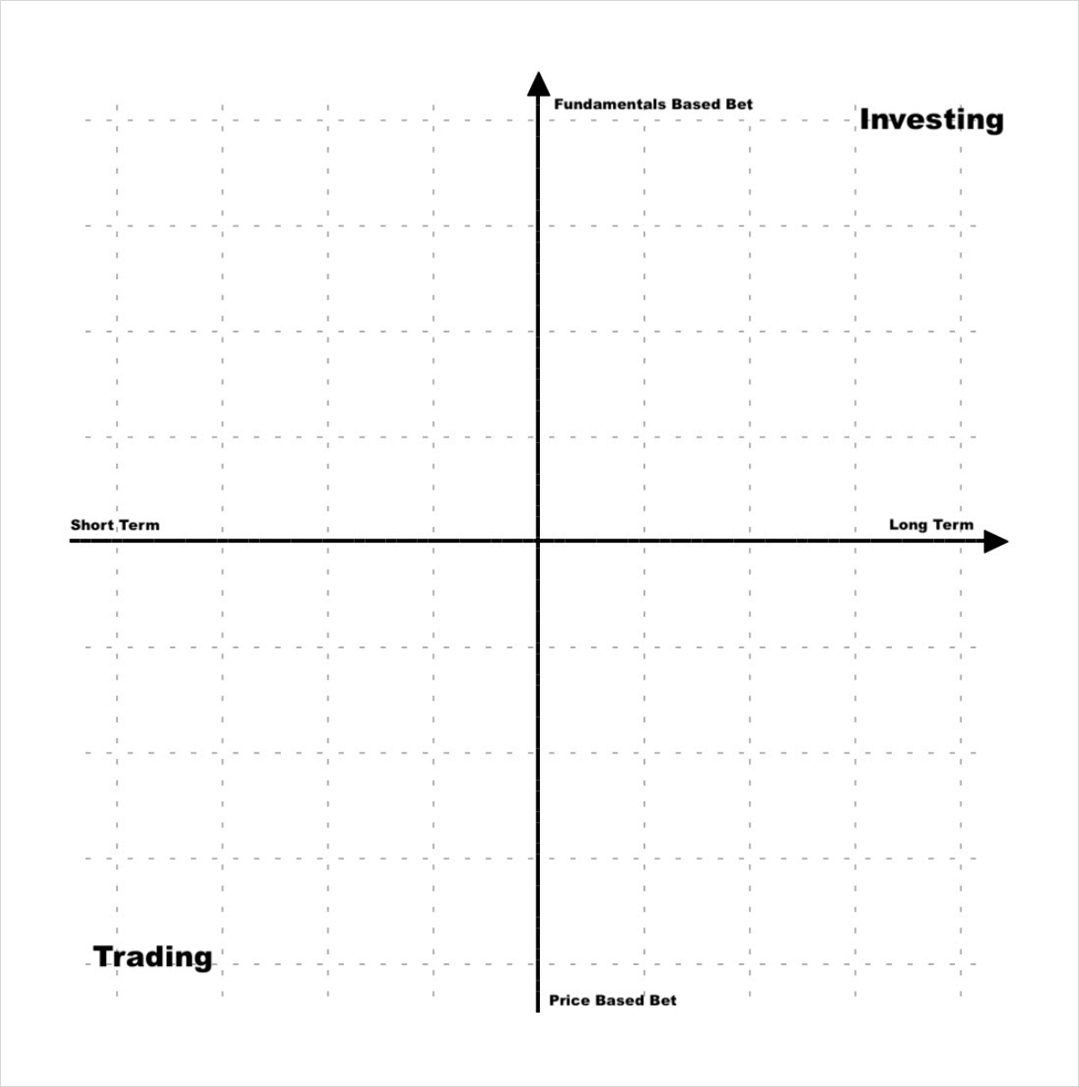 The simplest version of this grid

Most of our historical references seem to agree that if someone’s motive for a decision concerns itself with the actual economics of the business (or protocol) and the respective growth that is considered investment, whereas basing a decision purely on the expected future price of the asset is considered trading. With this approach, it’s possible that two individuals could externally act in the exact same fashion but be classified in two separate ways.

As an example, take the following two scenarios:

Both 1 and 2 have two entities going through the exact same motions, but you likely viewed them as an investor and trader respectively. The internal decision making of the two were radically different, but the process and outcome was exactly the same. In this specific case, the VC fund was focused more heavily on the actual economics of the business, whereas the hedge fund was merely speculating on whether individuals would place a premium on the perceived value of the business.

Let’s take a look at a separate set of circumstances that have a more understated difference around this concept:

The difference between the above examples is where the speculation takes place. Both investment and trading require speculation, but investment can be thought of as speculating on whether the economics of the business will succeed.

Speculation on price is viewed differently, because it is not core to the actual “success” of the investment for most assets in this world. If you choose to bet on whether people will like iPhones and drive cash flows for Apple, this is fundamentally different from betting on whether people will pay a higher price for Apple tomorrow because of their excitement around the iPhone—regardless of whether this excitement is objectively justified by the new technology.

Both are bets on human behavior, and humans are reflexive and memetic animals who often replicate social and physical trends in the same way. With this in mind, there is no philosophical reason to separate out the two types of bets. However, for the purposes of parsing investing vs. trading, the key is framing “fundamentals” within the small realm of the asset being bet on.

Turning our attention back to cryptocurrencies, the discussion introduces a slight complication when you consider that Bitcoin is not a cash-flow producing asset. By the way of Buffet or Keynes, investing in Bitcoin would be a misnomer as there is no real economics to speak of in the traditional sense. Bitcoin is purely a bet that people will continuously find value in Bitcoin. On the other hand, many buyers of Bitcoin buy it intending to hold it over an extremely long duration. So while the motive may resemble a trade, the conviction level for many reaches that of an investment. Given this framing, it seems Bitcoin resembles a high-conviction trade for many as the success of Bitcoin is measured in terms of price for the most part.

The philosophical differences are not purely for fun. Understanding the qualifications of both lends itself a use to the average market participant for a multitude of reasons.

Once one understands that trading is a short-term, price based game, one can start to parse out general rules. First, it’s always more valuable to ask the question of the perception of the fundamentals rather than the actual fundamentals, as perception drives price in the short term more than true fundamentals do.

When looking at a trade in the crypto space, one should focus on the criteria that directly impact price instead of those that tangentially do. A long trade on MATIC, for example, would be dictated more by the current sentiment, open interest, unlock schedule and trading patterns than its total value locked, security model or 6 month roadmap.

When investing, it’s preferable to ignore the short term perceptions of the market and focus on the larger picture of how the path will actually unfold. One should spend much more time building conviction in an investment than a trade, given the duration is likely to be longer. More time should be spent on the value accrual mechanisms, the potential for product fit, and the long term perception of the market.

The best market participants have always been able to blend the high level frameworks with direct practical actions and methods. Having a solid understanding of the philosophical differences can often help individuals develop and execute, and become better and more rigorous traders and/or investors (or both!).