Market Dislocations in Crypto and how to benefit from them

When stress occurs In the traditional world, there are many guardrails in place to ensure an orderly market. These rails have been placed after learning hard lessons about the snowballing effect a volatile market can have. Things like circuit breakers and – less common – Central Bank interventions happen during excessively volatile periods in the traditional markets because they allow market participants to pause, breathe, assess and act, instead of being forced into real time decisions and margin calls. Through living the events of markets, many participants have come to agree on these rules to avoid pain.

In the crypto markets, this is a completely foreign concept. Participants in the crypto markets tout the truly-free nature as a selling point, a beacon of the new age where anything goes and a wild natural experiment for all to experience. Of course, this lack of safeguards leads to the spectacular blowouts and meltdowns crypto investors experience every 6 months or so, with outsiders generally looking on with fear.

As an active trader, you relish these moments. Excessively volatile and fearful markets tend to be some of the best for trading for those savvy market participants who are able to identify and take advantage of the structural breaks that occur frequently during these drawdowns. Exchanges go down, forced selling presents high EV buying opportunities, futures products deviate from their indexes, options can reach extremely high IVs, and on-chain liquidations can drive arbitrage opportunities. These all represent a verifiable feast for the market participant with cash to deploy.

As a pertinent example, on Deribit, you can often see IVs blowing out due to market makers widening markets or accounts becoming forced option buyers through liquidation. Usually you won’t be able to sell much volume at extreme IV levels, but often small ticket investors can take advantage of these blowouts to sell options at extremely high levels with relative confidence in a reversion to the mean once the market volatility subsides (usually will be anywhere from 12 to 48 hours after the initial blow-out).

On October 19th, 1987, the Dow Jones experienced its single largest daily drawdown falling 22.6% in a single session, courtesy of mass panic and margin calls. This was the first animal spirits collapse the traditional markets had experienced in the age of automated trading, and the preset nature of many trading decisions (such as the prevalent use of stop losses) exacerbated the sell-off.

At the time, a 20%+ drop in a single session was unfathomable to most market participants, and the reaction to the drop was swift and fierce. Regulators immediately swooped in to ensure safeguards that would stop the cascade of panic and forced selling that led to what, in their view, was an avoidable snowball.

The main rule instituted was the concept of a trading halt. This “pause” approach was actually tested real time during the 1987 collapse as the NASDAQ experienced an exchange failure and the stocks on that exchange only fell an aggregate of 11%, experiencing about half the decline of the S&P500. So there was a natural experiment regulators could point to, and by January 1988 there was SEC regulation in the works (now called Rule 80B) that required exchanges to have trading halts on securities that hit certain thresholds of movement.

The best analog to the ever-present drawdowns in crypto is that we experience a 1987-like event multiple times a year, where the combination of high leverage, collateral inefficiency and animal spirits combine to produce sharp sell-offs. Unlike the traditional world, the crypto world does little to stop it from happening again. Some exchanges like Deribit are enterprising and have introduce sub-second circuit breakers (if price moves more than 2.5% in a second a stop will be triggered) but the vast majority of exchanges have no such safeguards in place — ensuring that the crypto world will get a front seat to these drawdowns for some time.

May 19th, 2021 saw Bitcoin collapse approximately 20% in the span of 45 minutes before retracing the entire crash in the following 2 hours. This move was the culmination of general weakness in the market due to the evaporation of spot buying, and the overexposure of the market to high beta assets with a lack of sidelined cash.

Over 3B of liquidations happened on Bitcoin futures products alone that day, not including liquidations across altcoin futures. The liquidations and speed of the market collapse that day threw the market into a frenzy, with a variety of dislocations. The mechanics of the sell-off have been widely discussed, so the majority of the discussion will be focused on the areas where the market became disjointed courtesy of hard and fast volatility.

One of the most common occurrences during high stress markets is the liquidation of positions on futures positions that will often push the price of futures to extremes.

Due to the high demand for leverage in the markets, futures products generally trade in contango (meaning they trade above the clearing price of spot markets). This makes buying futures in backwardation (trading below the clearing price of spot markets) an attractive opportunity. During this most recent crash, the annualized quarterly Bitcoin futures rate on Deribit hit a low of -13%, and the quarterly ETH futures rate hit a low of -23%. 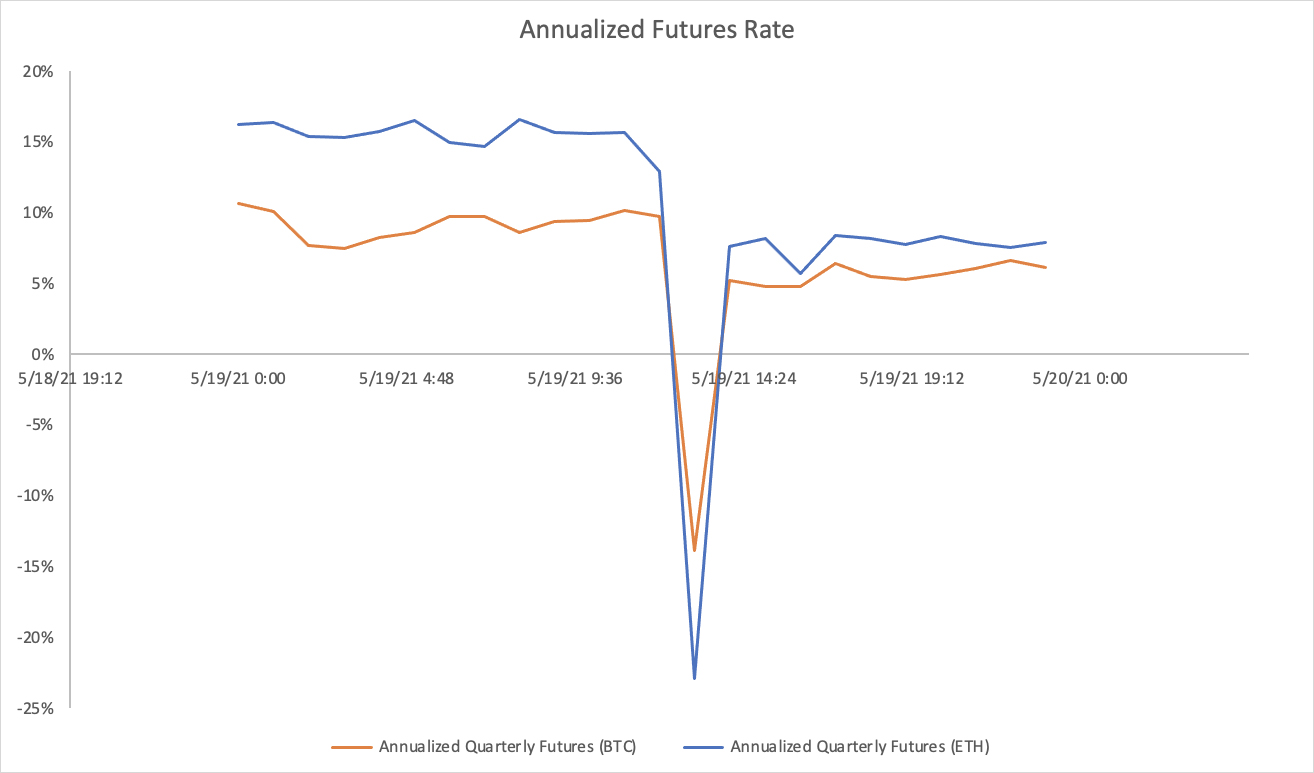 Both of these futures products reverted quickly from a state of backwardation to a state of contango, and individuals who managed to get filled on those futures due to the forced sellers ended up quite happy — an easy example of an inefficiency in the market a savvy trader can take advantage of if they’re paying close attention. For those looking to establish long positions on the next “capitulation”, looking at futures during the decline as an alternative to buying spot could be a smart move.

When the spot markets experience large vol events, market makers will often widen their markets on options books and in some cases you will find extremely thin liquidity due to uncertainty around market conditions. In order to liquidate accounts that are short options, Deribit will sometimes use futures to hedge out options exposure, but will also attempt to work out of options positions — creating forced buys (usually) of certain strikes and instruments.

Due to both liquidations and skittish liquidity, you will often see extremely high implied volatilities which you should be able to sell into as a relatively high expected value play on mean reversion of that IV once the market has cooled down. Note that in this most recent market structure, DVOL actually blew out twice, once on the initial collapse, and then a secondary time (even more forcefully) during the retrace. Both of these sharp moves were met with retracements over the next 24hrs. 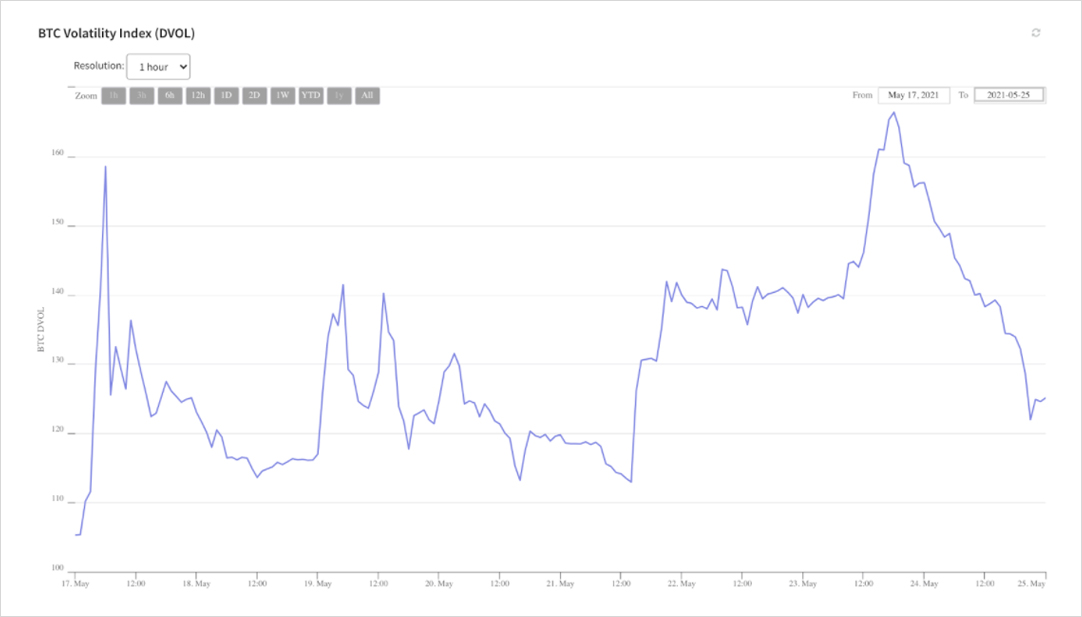 A more nuanced version of a market dislocation is the concept of “forced selling” being an EV positive place to deploy fresh capital, betting on the idea that once liquidations and margin calls are fully worked through, there will be lack of natural selling at that price level, giving the asset the ability to rebound sharply.

As an example, Bitcoin rebounded approximately 20% off its low in an hour on May 19th, Ethereum bounced ~35%, and Uni bounced ~50%. These sharp up moves are only possible because a substantial portion of selling were forced sales. Forced sales often happen at the most inopportune prices as liquidations occur in batches and during peak stress for the market.

Given the opportunity, most forced sellers would not be inclined to sell at the price they are being exited at. This is why incremental liquidation systems that only sell a portion of your position at a time (like the system Deribit has) are generally superior (from the client perspective) to full liquidation systems that sell your entire position the moment maintenance margin has been hit.

Cascading liquidations do often present some of the best buying opportunities. When liquidations have been fully worked through, generally the market rebounds higher as the main source of selling in the market has now abated. To take advantage of this inefficiency requires a bit more expertise than buying discounted futures or selling overpriced IV, but the opportunity persists nevertheless.

During this most recent sell-off, DeFi actually ended up holding up better than expected with no major failures of critical systems — however this doesn’t mean there weren’t opportunities to take advantage. First and foremost, when markets rapidly reverse you will often find large liquidations from lending platforms such as Compound and Aave, which sophisticated liquidation bots can take advantage of.

Traders are blessed to be able pick off opportunities like this, during a golden era of dislocations. These will likely persist until enough idle capital comes into the crypto ecosystem for the explicit purpose of smoothing out market operations. It’s possible that other exchanges outside of Deribit will endeavor to introduce more market guardrails — which would be good for the stability of the markets but bad for those active traders.