Polkadot is a long-awaited protocol of protocols set to be among the largest mainnet launches of 2020. Its mission is interoperability, shared security, development via WebAssembly, and user-driven network governance.

Today we first explain the idea of on-chain governance more broadly and then examine the recent community-driven attempt to redenominate DOT, the native token of Polkadot. It is an interesting showcase of the power of onchain governance as well as the inherent tradeoffs.

An Overview of On-Chain Governance

On-chain governance is a type of governance and upgrade of blockchain protocols executed with on-chain voting. Everyone has the opportunity to propose changes to the protocol and thereby make it a referendum. Token holders can then vote for or against the referendum during the voting period.

The two largest public blockchains, Bitcoin and Ethereum, currently do not employ any form of on-chain governance. They instead use what is known as rough consensus, an idea stemming from open source engineering to mean “the sense of the group.” In essence, the core maintainers of the codebase discuss rather than vote and believe in the possibility of reaching consensus through discourse. When such consensus is arbitrarily deemed to be reached, the core maintainers schedule a software upgrade.

While this has worked for many issues, it also means that there is no formal way by which an idea can be rejected or affirmed. There have been informal coin-votes, or straw polling to signal opinion, on Ethereum, as well as signaling via nodes and miners on Bitcoin. However, these are non-binding signals of preference and do not directly translate into changes in the protocol layer.

In practice, some technologically political debates ultimately cannot be settled via rough consensus. In extreme cases, not only was rough consensus not reached on particular proposals, but the contentious camps no longer shared a common understanding on how to arrive at future agreements. These resulted in contentious hard forks–the creation of two separate blockchains that share a history of transactions but diverge at a specific point in time. In the case of Bitcoin, the Bitcoin Cash hard fork in August 2017 resulted from one group within Bitcoin believing the block size limit should be raised while another group believing it should not be. In the case of Ethereum, after an early experiment went wrong and a substantial amount of ETH tokens went into the hands of hackers, some preferred the chain which enabled the hacker to keep his winnings while others preferred the chain which rolled back to a snapshot from before the hack occurred.

Aside from contentious hard forks, another issue that rough consensus governance faces is that proposals can be repeatedly brought up without any formal way to reject or affirm them. For instance, ProgPow–the idea of changing the Ethereum proof-of-work algorithm, is summoned every few months with no way to settle the matter. Interestingly, when it has been re-summoned, it is often by an Ethereum core developer who states that this technological upgrade seems ready for the next fork. Indeed, proposers of changes tend to describe their efforts as technological upgrades rather than political ones.

Tezos is the first large-scale project to deviate from rough consensus and deploy on-chain governance. First described in August 2014, the mainnet was launched in September 2018. Tezos describes itself as a “self-amending ledger,” and posits that by formalizing proposals, votes, and implementations, it could evolve and upgrade forklessly. XTZ, the native token of Tezos, enables users to vote on these proposals with a weight of one vote per coin.

Since Tezos, there have been several other projects, both base layer and application layer, which have sought to use principles of on-chain governance to decide the future course of action. The largest of these would be Compound, an Ethereum-based autonomous money market application which uses proposal-based voting to determine the parameters of its economic system.

Moving back to Polkadot, the lowest unit of the Polkadot network is a Planck and the total supply is 10^19 Plancks.

The native token of Polkadot is referred to as a DOT and is defined as 10^12 Plancks; hence, the total supply is 10^7 = 10 Million DOT. At a price of $100 per DOT, this implies a market capitalization of $1 Billion.

The community is deliberating over whether or not to change the definition of a DOT from 10^12 Plancks to some other quantity of Plancks, namely 10^10 Plancks. If it were enacted, that means that anyone holding 1 DOT would now have 100 DOTs. Such a denomination change on a major public blockchain without requiring a token swap or hard fork would indeed be unprecedented.

We summarize the advantages and disadvantages.

A non-binding referendum on redenomination to 10^10 Plancks, was voted on and passed on Kusama in mid-May, but the same referendum would need to pass on Polkadot itself for it to go into effect. 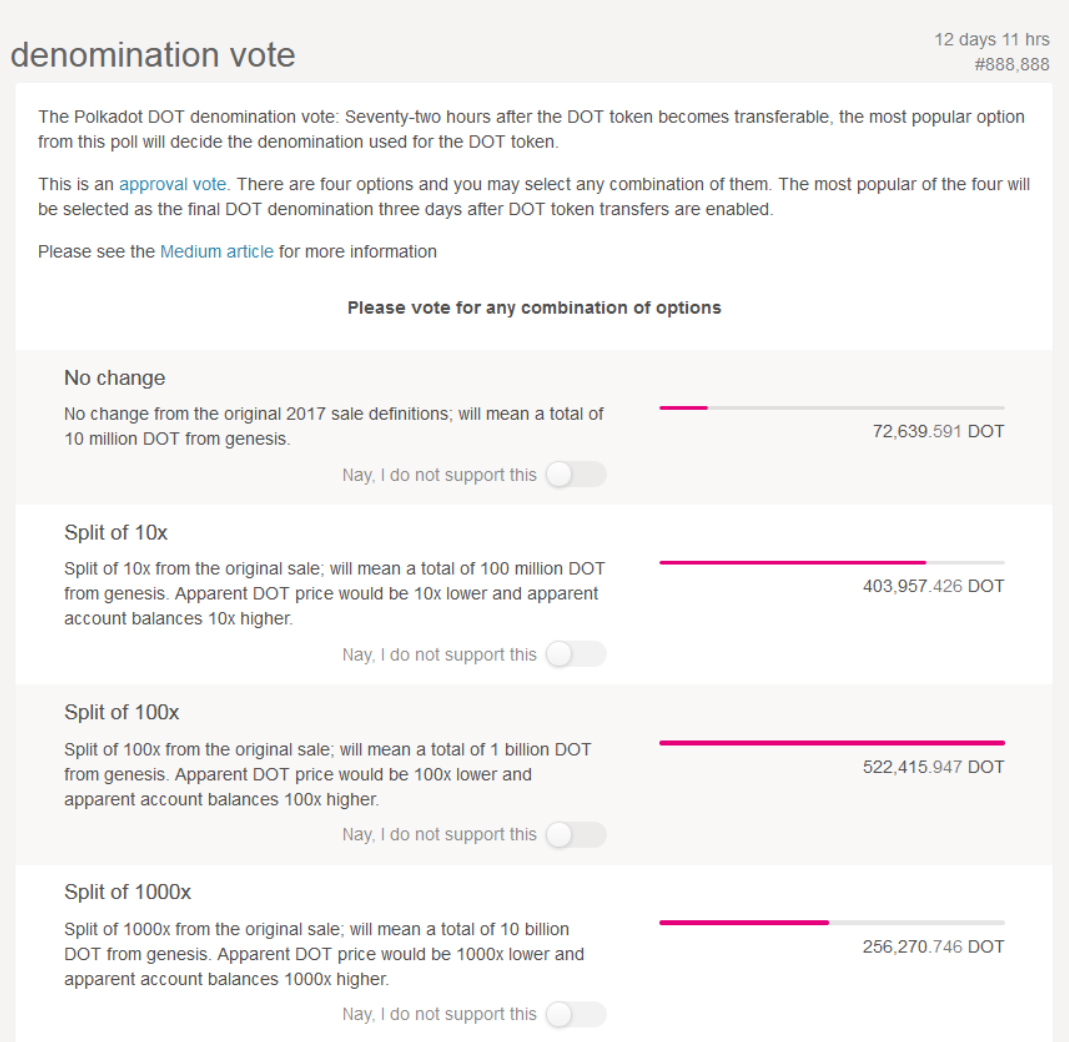 The community is now participating in a new referendum with a Poll Module allowing voters to select between 10M, 100M, 1B, and 10B total DOTs. If passed, it would only be executed 72 hours after transferability is enabled on Polkadot to allow OTC trades time to settle.

Whatever the outcome, it showcases the potential of on-chain governance to enact changes that would be nearly impossible on other blockchains. I personally see the advantages of redenomination as enduring and practical and ultimately within the spirit of Polkadot itself.