Rollback or Reimbursement: An Analysis

A rollback is implemented by exchanges and is a reversion of trades to a specific point in the past. Trades during this time are deemed to have occurred within the rollback period and erased from the trade history. These erased trades lose their impact on account balances and positions as if they had never been executed in the first place.

The rollback mechanism is typically used under exceptional circumstances, which have caused abnormal price wicks, consequently causing erroneous trading activity. Due to this, the validity of the trades is questioned. Thus far, the main reasons for rollbacks on crypto exchanges have been:

In both cases, many clients lose money unexpectedly and due to price movements that are not present in the broader market. However, an equal number of traders gain from this, and therefore finding a solution that satisfies both sides is crucial.

To explain further, we will look at a few different historical situations involving rollbacks and then analyze the Deribit case earlier this month. 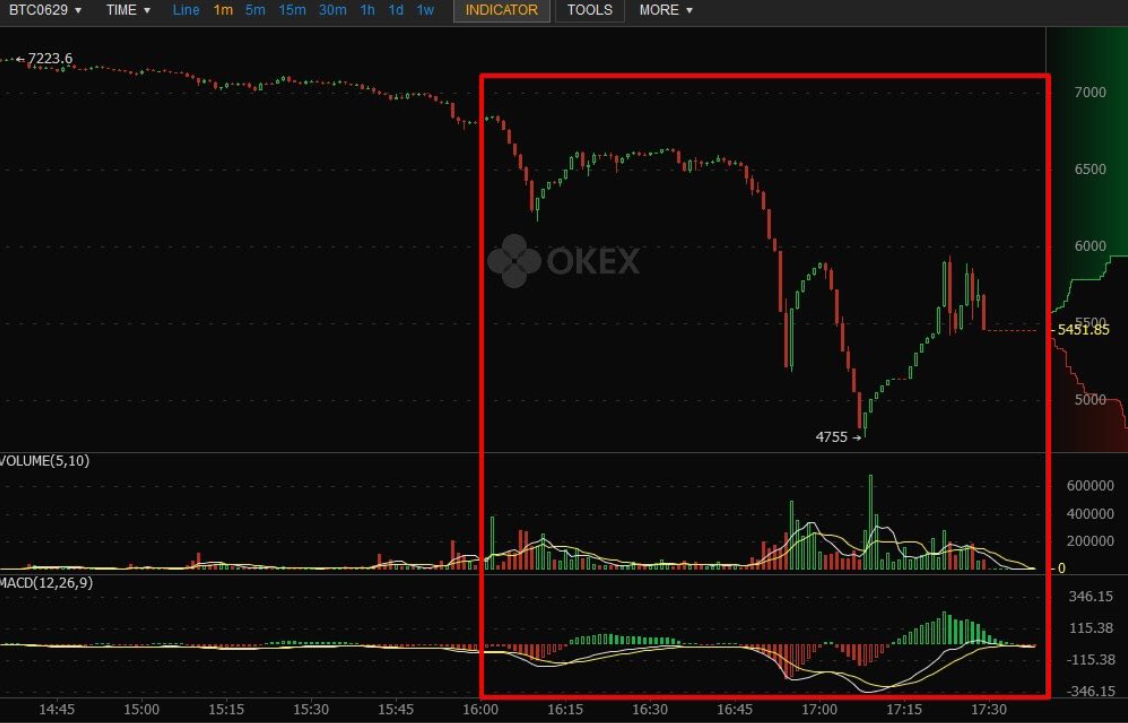 The best-known rollback in crypto markets was the rollback of the BTC/USD future on OKEX, on March 31, 2018. The price of June-2018 expiry futures on BTC/USD rapidly decreased from $7,000 to as low as $4,755 while the BTC price on spot markets globally remained stable at $7,000. Okex halted the trading, while the futures were still priced at $5,452 to avoid further damage and to understand how to address this situation. A large client outrage followed as the massive price move caused a cascade of liquidations. Okex explained the situation with an irregular selloff and vowed to protect its customers. The exchange later announced that it would implement a rollback period of roughly one and a half hours to cover the period of low prices.

This announcement was extremely popular among clients who had been liquidated during this period. However, clients who opened new positions were disappointed, as they felt that they had taken the risk, yet have not been rewarded. They also questioned under what principles a series of trades can be deemed invalid. 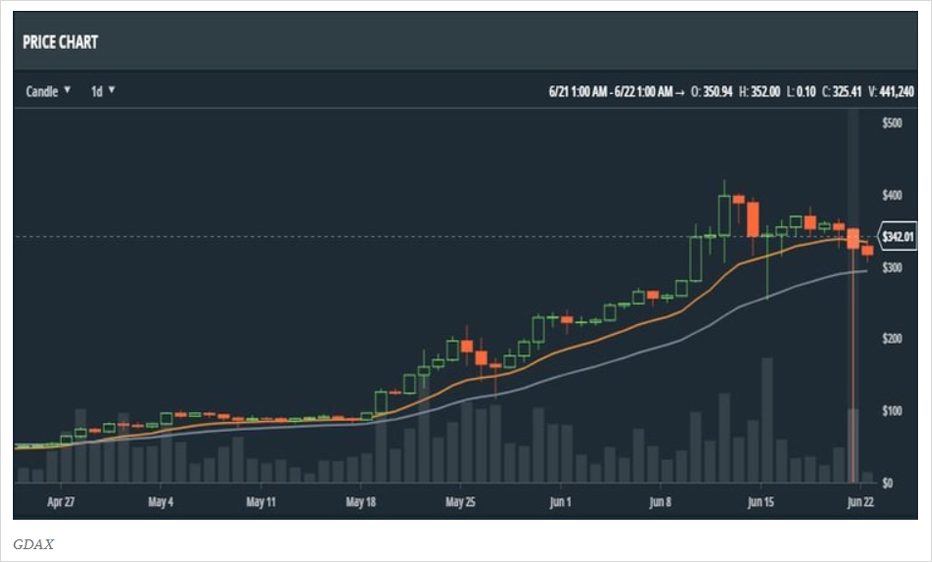 On June 22, 2017, the ETH/USD market suddenly crashed from $319 to $0.10 cents. The price move was triggered by a series of large market sell orders, causing many clients to be liquidated or have their stop-losses hit. Trading was never halted and the price recovered soon after.

Despite the client outrage, Coinbase remained firm in their decision.

“Our initial investigation shows no indication of wrongdoing or account takeovers. We understand this event can be frustrating for our customers. Our matching engine operated as intended throughout this event and trading with advanced features like margin always carry inherent risk,” White said in a blog post.”

Coinbase acted in accordance with the example set by other crypto exchanges, such as Kraken and Bitfinex, that follow the principle — all trades stand.

In their trading rules, Coinbase strictly emphasizes the importance of trade finality as a principle of market integrity:

“We are continuing to conduct a thorough investigation and will keep customers updated with any resulting actions. With that in mind, it is important to note that these trades are final in accordance with our GDAX Trading Rules (Section 3.1). Honoring properly executed orders is critical to maintaining the integrity of an exchange.”

It is important to note that they decided to reimburse clients using company funds. They wanted to mitigate losses for those affected without hindering the principle of trade finality. Therefore, all traders were satisfied, reaching the best possible outcome for all. If rollback had been conducted instead, those who profited would have been punished and disincentivized from placing orders that increase market depth. 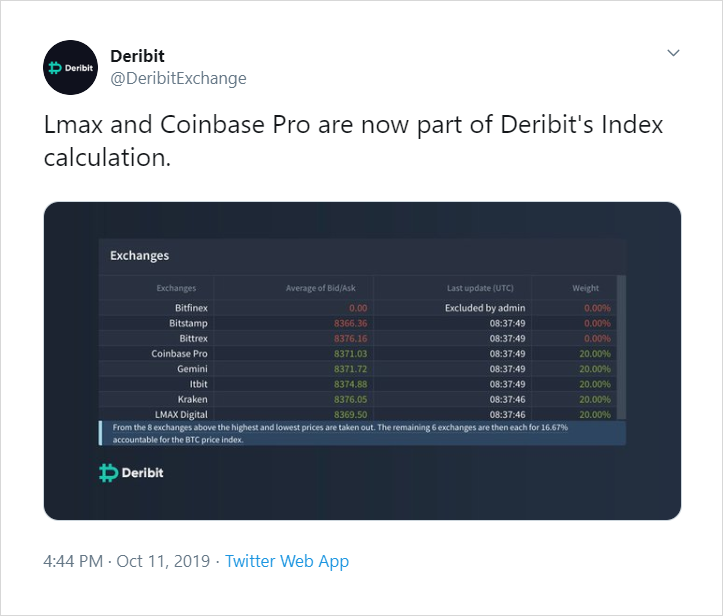 Deribit added LMAX to its index constituents in mid-October, with the goal of further diversifying its index. Unfortunately, two exceptionally rare events happened at the same time, and due to a bug in the system, index calculation did not exclude all outliers.

On November 1, 2019, at 21:00:01, LMAX’s started a five-minute maintenance window, setting the BTC price to 0 and thus becoming the lowest-priced exchange in Deribit index calculation. Five seconds later, at 21:00:06, Coinbase experienced issues with their order book, again contributing a second 0 price to the index. Due to an error in the system, only one price got recorded as an outlier, thus causing an index price anomaly. The index price on Deribit was as low as $7,800 while on other exchanges the price remained stable at $9,000. This triggered a cascade of liquidations that pushed the price even lower.

Deribit founders immediately issued an apology and confirmed that they had fixed the issue and that an incident like this would not happen again. Deribit followed the Coinbase precedent and reimbursement their clients from company funds, thus maintaining the principle of trade finality and arriving at a solution that satisfied most.

Deribit emphasized that due to the nature of the crypto market, rollbacks need to have a very efficient implementation mechanism or it can be damaging to many traders. In a highly fragmented and interconnected market, traders placing bids on various exchanges need to know that when trade confirmations come through, they are final. Without finality, these market makers cannot efficiently hedge as they do not know what their risk exposure is.

The rollback mechanism must be extremely efficient so that traders are notified in advance and can adjust their positions on other exchanges accordingly. If they are not able to do it, instead of rollback having a neutral effect, it can be highly damaging. If this is the case, market makers would have to price in a likelihood of possible market rollback. However, the ability for market makers to safely redistribute liquidity between exchanges is a must, without which market efficiency and liquidity would suffer drastically.

The reader may ask: why is there no standardized rollback policy and why the market cannot agree on one unified policy?

Standardization, as of yet, has not been reached in traditional markets either. Each asset class, financial instrument and country has different trading specifics, conventions and rules. Therefore, the same situation can have different outcomes depending on the circumstances. Decisions of each market likely reflect the values of their respective stakeholders. Due to this, finding one standardized solution to fit all is infeasible.

In listed futures markets, trade finality is a very important principle, while in foreign exchange, it is not. This leads to frequent informal trade cancellations in FX and occasional multi-year lawsuits related to whether a trade is “off-market” or not.

In the equity market, the consensus often varies depending on exchange and country. In early January 2019, the price of one of the largest listed stocks on the Singapore Exchange (SGX), Jardine Matheson, suddenly fell by 83%. SGX swiftly affirmed that there is no reason to cancel the trades. The same trades, if occurred in the US, may have been canceled.

Crypto market participants highly value public blockchains as a trust-minimizing and finalized way of transacting, so it is perhaps no surprise that the industry prefers trade finality. However, in traditional financial markets, efficiently implemented rollbacks are perceived as the best solution. When two different opinions collide, it is crucial to find a solution that is in the best interest of most and lead to a path forward.

Even in the absence of standardized regulation, exchanges have looked out for their customers and done everything possible to uphold their longstanding reputations. Exchanges have compensated from their funds rather than breaking the principle of trade finality. However, crypto trading is relatively new and processes of crypto trading get improved continuously. More participants of traditional markets are entering crypto space, and therefore expectations can shift. In the future, there may be more reasons for unexpected trade abnormalities, and their causes might not be directly the fault of an exchange. Therefore, reimbursement might not be the best course of action. Due to this, exchanges have to advance their risk management and have multiple tools to deal with these uncertainties in a way that is the most efficient and in the best interests of their clients.