Recently, US stocks hit new highs again. Voices for interest rate increases in the first half of this year are getting louder and louder, but it seems no longer able to stop the crazy rise in US stocks. In this context, it is worth analysing the “Big Short” investor at the end of last year and the latest options trade by Nancy Pelosi, the “Stock God” of U.S. House of Representatives.

Previously, we reported on the disclosure of the “Big Short” investor Michael Burry’s fund positions in Q1 and Q2 of 2021 (The “Big Short” Investor Shorted Tesla Stock Via Puts and Bet on Inflation) and analysed his positions. Two of his most high-profile positions at that time, Tesla puts and a short position against the US bonds, were missing from the latest Q3 disclosure.

It is worth noting that the notional amount of shares corresponding to puts against Tesla shares held by the “Big Short” investor at that time reached $530 million in Q1 Disclosure. By the end of Q2, he had increased the position to $730 million.

Although it remains unknown when Michael Burry closed his position, but seen from Tesla’s stock price changes over the past six months, the odds are that he lost money on this position.

We’ll follow up on his Q4 Fund Disclosure to see if he shorted Tesla stock again after Tesla’s share price almost doubled.

In addition, the short position against the US bonds arguably also ended with a high probability of losing money. The prices of the following underlying assets were not clear in Q3.

The Q3 Disclosure shows that in addition to Tesla puts and Cathie Wood’s positions in ARK Fund and US bonds being closed out, 18 out of a total of 22 positions were closed (including positions in call options on the stocks of Facebook, Google, Walmart, etc.).

Three new stock positions were added in Lockheed Martin, Now and Scynexis. Those who are interested may search for these companies to know more about them. The position held by the “Big Short” investor was not only large, but also quite aggressive in its conversion!

The “Stock God” of the U.S. House of Representatives

Recently, the options position held by an 81-year-old lady has also attracted widespread attention. Of course, it is not an ordinary old lady but Nancy Pelosi, of whom even tech giants are in awe!

This old lady is by no means an ordinary person either. Back in 2007, she was already the first female speaker of the US House of Representatives. From 2011 to 2018, she served as the Minority Leader of the House. In 2019, she returned to serve as the speaker of the House of Representatives. The brilliance of her career suddenly seems less prominent compared to the returns on her investments and wealth.

As the speaker of the House of Representatives, she is worth $120 million, despite earning $230,000 a year. Her steady, accurate and ruthless style of “investing”, her skilful use of options, and her excellent sense of “timing” have allowed her to make returns that are far ahead of many Wall Street’s top guys. 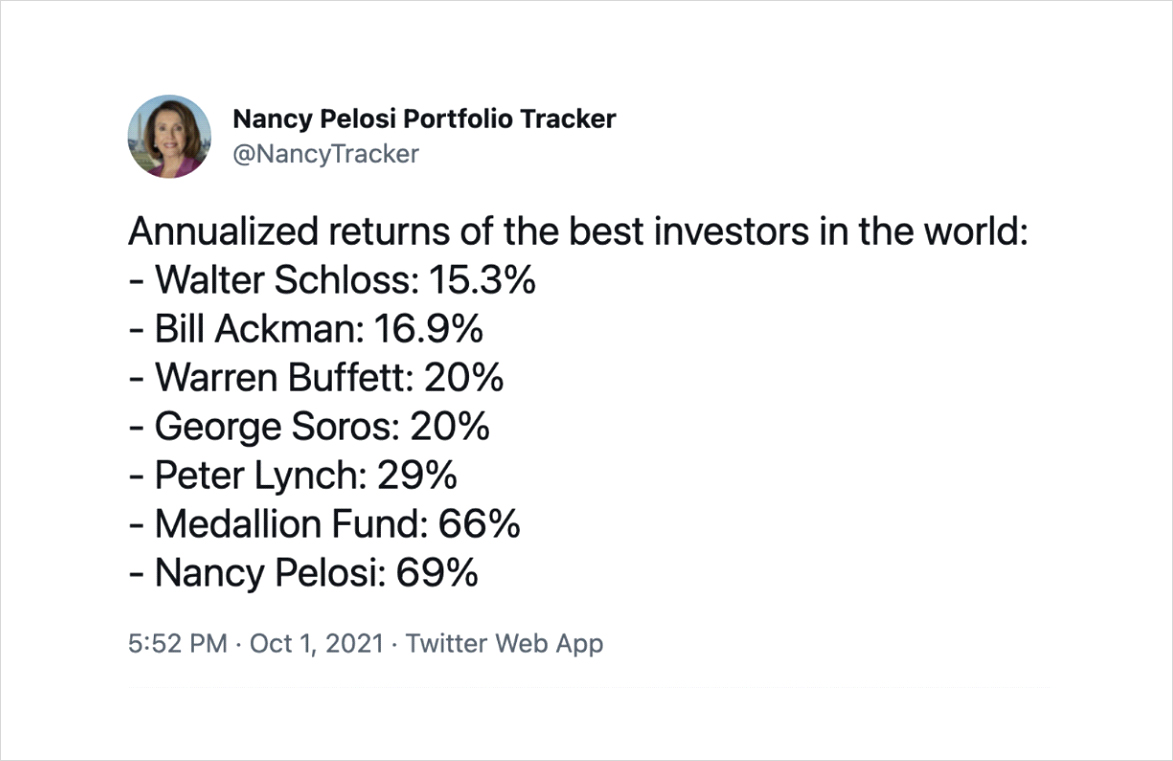 As early as six months ago, the Stock God’s trades and value were hotly debated in the media, because the speed with which her value skyrocketed and the timing of her “trades” were both too good to be true. For example, in January last year, her husband bought one million dollars in Tesla stock, followed by Biden’s electric vehicle incentive plan.

In March, she first purchased nearly $2 million worth of call options in Microsoft. Two weeks later, Microsoft received an order worth $22 billion from the Department of Defence to provide augmented reality headsets for the U.S. Army’s combat teams. In July, it was reported that Pelosi’s husband had made a $5 million profit on the Google options. Of course, when confronted with questions from the public and the media, Pelosi claimed that her husband made all these investment decisions without her knowledge and argued that members of the House of Representatives who are not involved in legislation should have the right to participate in the “free market”. Believe it or not, American netizens “believe it” and have created a Twitter account for the “Stock God” Alliance with over 200,000 followers. 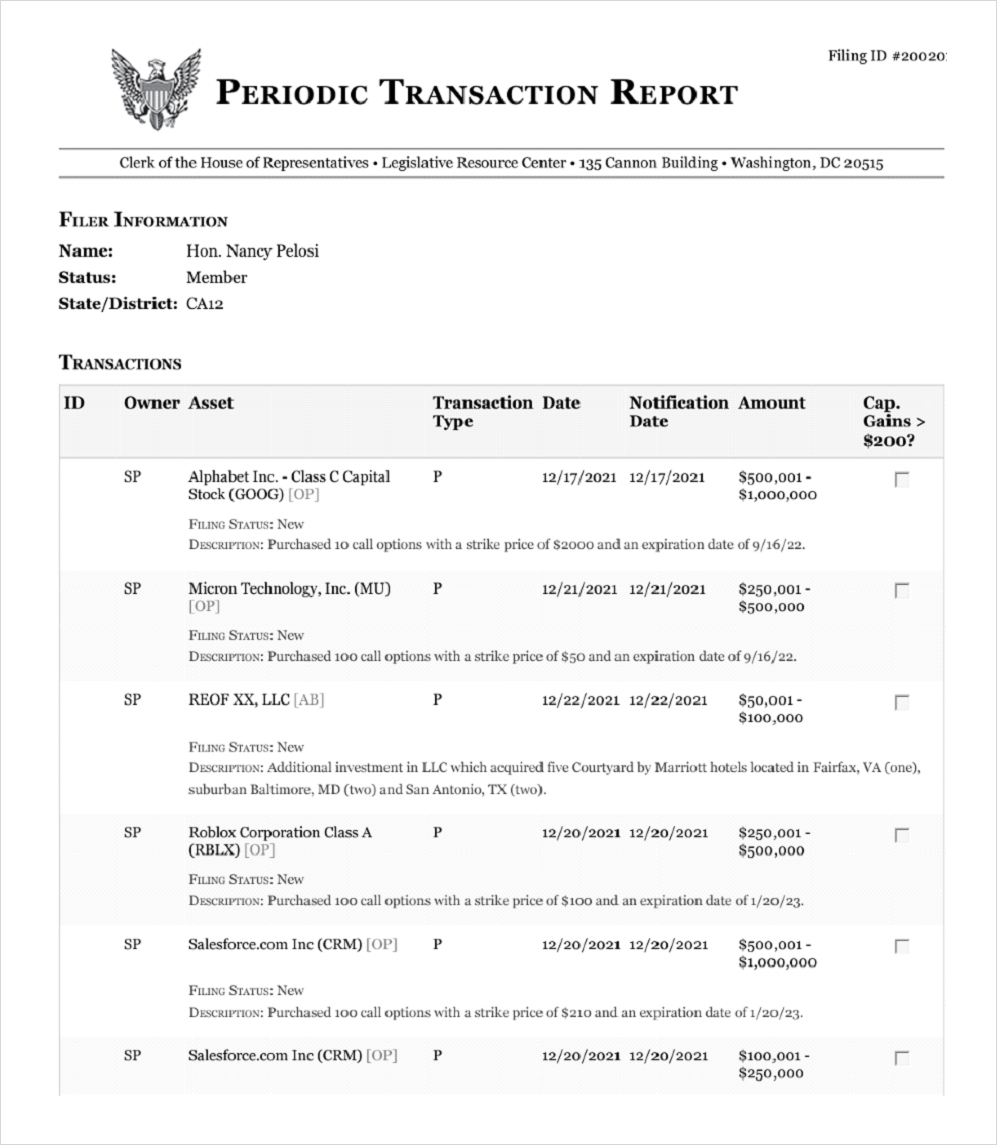 Careful readers will notice that these options are all in the money (ITM) call options. Why did she go long with ITM calls?

First, ITM options are cheaper than the underlying stocks. Take Google for example. The price of the option that expires on September 16, 2022 with a strike price of 2,000 was $800 on the night of January 7. Buying ten contracts would need 10*100*800 = $800,000. If she were to buy 1,000 shares, it would cost her $2.74 million at the stock price on the night of 7 January. In other words, she leveraged this trade by 2x through ITM options! Those with some knowledge about options may say that the Delta of deep ITM options is still smaller than that of stocks. So, when stock prices go up, the prices of ITM options also go up, but the rate of increase is comparatively less than stocks. This is true. However, the Delta of a call with a strike price of 2000 expiring on 16 September is 0.9, which is still good leverage.

Second, an ITM call = Underlying stock + Put option. If for some reason, Google stock plunges by more than $740 before the September option expires, then the value of ITM call will become zero to automatically stop loss. It would be like owning the underlying stock while buying a $2,000 put option. But it also shows in the other direction that she was not completely sure about this trade, otherwise she would have just bought the underlying stock.

These trades that allow for both aggression and exit are so much wiser than retail investors’ strategies of buying one or several underlying asset(s) with all their money at once or buying expiring options. Anyway, the positions of the “Stock God” must still be disclosed. We will keep an eye on them. Maybe they are the fortune code.

For more research like the above visit Lu Wang via ‘Sansi Options’ on WeChat.