Protocol forks in crypto seldom have a good reputation. Often viewed as a net negative for the space, forks quickly fade into obscurity after the initial hype fades. But is this a result of poor execution or are forks never meant succeed?

Today we explore how SushiSwap, an Automated Market Maker decentralized exchange (AMM DEX) is making headways where many others have failed. This article will provide an in-depth review of Sushiswap’s progress, as well as key characteristics needed to launch a successful community fork.

Recap: The road so far

Launched in early September by anonymous founder Chef Nomi, SushiSwap was the first community-based fair launch DeFi fork to come to market. SushiSwap was born to address a missing pillar in Uniswap’s value proposition – a way for the DeFi community to share and participate in the platform’s success. At the time, Uniswap was the undisputed DEX champion. However what $SUSHI did surprised everyone and called into question the argument of viewing liquidity as a competitive advantage.

Employing a Blitzkrieg marketing campaign, Sushiswap went after Uniswap’s capital with a vengeance unseen hitherto, offering ~95m $SUSHI tokens (38% of total supply) to the community via a liquidity mining program. On the first day, Sushiswap attracted $1.1bn of TVL with the majority of AUM siphoned almost exclusively off Uniswap. After reaching a high of $1.5bn, Sushiswap’s decline was as swift as its rise. Over the span of the next few weeks TVL and Daily Traded Volume collapsed as mercenary farmers dumped their farmed $SUSHI on the open market. The reflexive nature of liquidity mining programs only served to accelerate this process.

Just as the hype faded, Chef Nomi executed the now infamous ‘exit scam’ where $15m ETH was removed from the Sushiswap Treasury without the community’s awareness or consent. It seemed like the nail was in the coffin at this point and that Sushiswap was destined for failure. 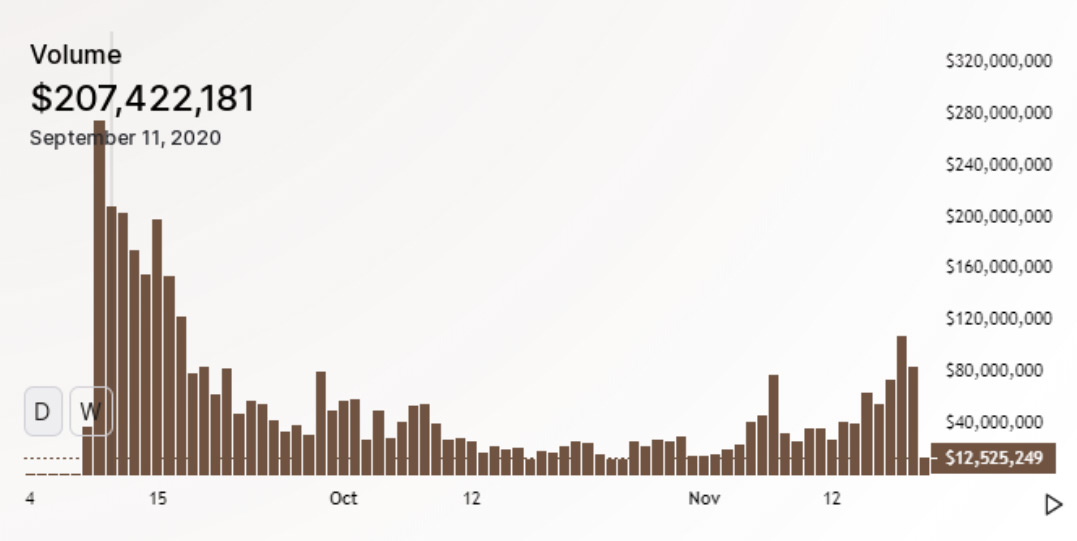 Fast forward till today, SushiSwap is resurfacing once again as a contender for yield hungry capital. Liquidity Wars v2 is about to begin with the conclusion of $UNI farming and SushiSwap is well positioned to capture significant volumes of capital with its own array of incentives at its disposal. It remains to be seen how competitive dynamics change between the two as they trade blows with one another but one thing’s for certain – SushiSwap is here to stay.

What made SushiSwap different from the rest? On the surface, nothing in particular stands out. A fully anonymous team crafting a narrative around a food coin is hardly something to take seriously. However digging deeper, there is a method within the madness.

As with any market, first mover advantages are highly valuable. Although SushiSwap was not the first DEX to launch, they were the first DeFi fork in the space. This provided them with considerable mindshare amongst the DeFi community. Coupled with symbolically catchy branding (via the use of Sushi as a mental latch point) and slick UI design inspired by Yam Finance, SushiSwap laid the ground for memesis to occur. By combining features (Uniswap’s product and Yam’s UI) that gelled best with the community, they succeeded in galvanising a community to form around SushiSwap.

Prior to SushiSwap’s birth, the DeFi community had no means of participating in the upside of the explosion in AMM DEX volumes. Even as Uniswap began taking DeFi by storm, the community could neither govern nor share in the protocol’s success.

Enter SushiSwap – a 100% community owned fork of Uniswap. On top of equity participation, the community could also directly contribute to the protocol’s innovation via the SushiSwap DAO. New products and features that were desired could now be promoted and implemented with the community’s vote. Everyone could participate in SushiSwap’s success both from a governance and equity perspective.

Looking back, the marketing strategy employed by Chef Nomi was ingenious. By offering insane yields via 10x boosted rewards, SushiSwap completely captured the DeFi community’s mindshare. Targeting both yield hungry mercenary farmers and fair launch enthusiasts alike, SushiSwap’s attracted $1.1bn in TVL on its first day of existence. Although what happened after was unpleasant for $SUSHI token buyers (prices of the $SUSHI token collapsed 80-90% from ATHs), the aim of the strategy was achieved. After all – how else do you kickstart a community?

As sushi memes took Crypto Twitter by storm, the SushiSwap team shifted their attention to governance and tokenomics. They understood that marketing gimmicks would only last so long and underneath the memes, sound tokenomics were required. There are two key aspects of SushiSwap’s tokenomics (dubbed sushinomics) – The value of holding the $SUSHI token and its emission schedule.

From the get go, the team recognised the importance of establishing the connection between SushiSwap’s value capture and the $SUSHI token’s value accrual. Till today this is still a key issue many DeFi protocols have. Carving out 5 basis points of revenue to all $SUSHI stakers provides a direct financial incentive for investors to hold the SUSHI token. With this mechanism the $SUSHI token captures a portion of the cashflows generated by the exchange and provides a scalable pathway for tokenholders to reap rewards from SushiSwap’s success.

$SUSHI’s emission schedule is equally important. Liquidity mining programs are unique to crypto. Acting as both a token distribution and liquidity bootstrapping mechanism, many DeFi protocols fail to successfully construct a sustainable emission structure. By reducing boosted rewards by 90%, the SushiSwap team decided to forego sizable levels of TVL in favor of token conservation. The gamble paid off as SushiSwap maintained sufficient TVL ($250m) to consistently generate $10-20m of exchange volumes on a daily basis. The reduced emission rate also allowed them to selectively incentivize programs that improved $SUSHI’s value proposition. Furthermore, current liquidity mining programs apply lock ups to ⅔ of all $SUSHI rewards minted, reducing the selling pressure on the $SUSHI token. With a sound incentive plan in place, it made holding the $SUSHI token for the long term economically feasible.

Being a fully community run protocol, SushiSwap couldn’t afford bureaucratic governance. It needed to move quickly to combat competitors with autocratic execution teams. After handing control of the protocol to a multisig, the next task was to structure appropriate incentive programs.

Looking across other DAOs, empirical evidence shows that contributions born out of altruism are hardly ever sufficient in fostering an effective governance platform. With this in mind, the team placed considerable emphasis on rewarding external developers with respectable financial packages in return for proposals and development of new products.

This method of incentivization has thus far been very effective at attracting talent for one major reason – community developers have consistently been underserved by incumbent DAOs. No matter how altruistic or passionate developers are, operating expenses still need to be covered. By setting the precedent of offering favourable compensation packages denominated in both USDC and $SUSHI, SushiSwap does away with the unhealthy culture of underpaying its developers. When developers now submit proposals to the community, they do so knowing that will be appropriately compensated for their work. 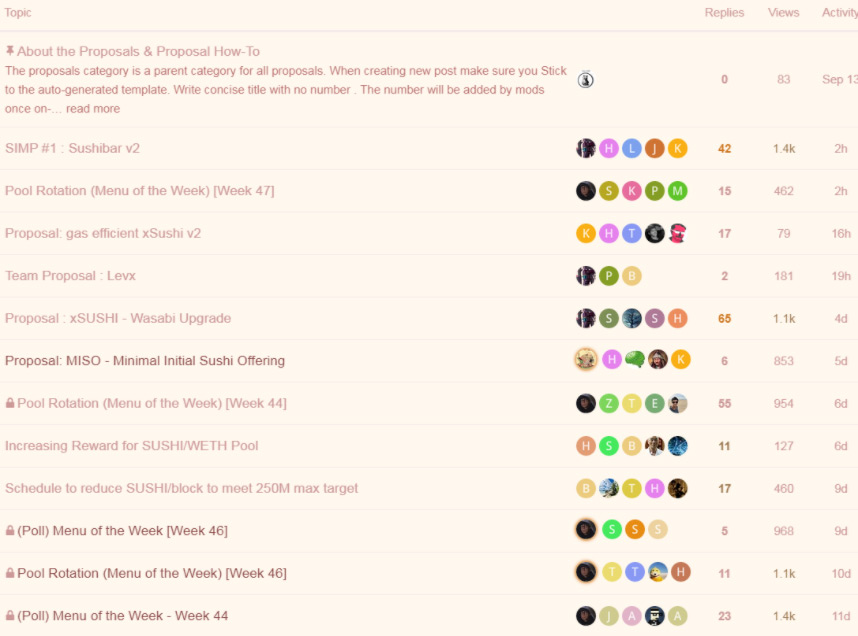 Consequently, Sushiswap has enjoyed a consistent stream of high quality governance proposals. 3-4 new threads are regularly opened per week with up to 1.5k views for popular topics. Several product features currently in use have been built by product developers (such as the SushiBoard). With this in place, SushiSwap’s development capabilities can now rival private development teams.

Ultimately, the SushiSwap team successfully bought themselves enough time to differentiate itself from Uniswap. With its own set of tokenomics and product roadmap, consensus is beginning to form that SushiSwap is no longer just a copycat fork of Uniswap. Upcoming product features including margin trading altcoin pairs (Bentobox), Impermanent Loss protection for liquidity providers (Gusoku) and SushiSwap’s own Launchpad (Miso) come together to complement the core product synergistically. It appears that SushiSwap may have done just enough to carve out a niche for itself in the competitive DEX space.

The First of Many

Looking back, SushiSwap is now recognised as the forerunner of vampiric forks. Shortly after its birth several others attempted to follow suit, hungry to ride on the coattails left by its predecessor. We explore how these forks have developed, and present our view on why they have failed to gain material traction below.

A multitude of vampiric food coin related forks exploded onto the market after SushiSwap; SashimiSwap, SakeSwap, BurgerSwap just to name a few. However what they didn’t realise was that although incentivized liquidity mining programs can be replicated, the ethos of the founding team and community cannot. Yield farmers adopted a more mercenary approach as each new food inspired farm diluted the staying power of the previous one. We began to see the same pattern across all food coin forks in both their TVL and their token price. 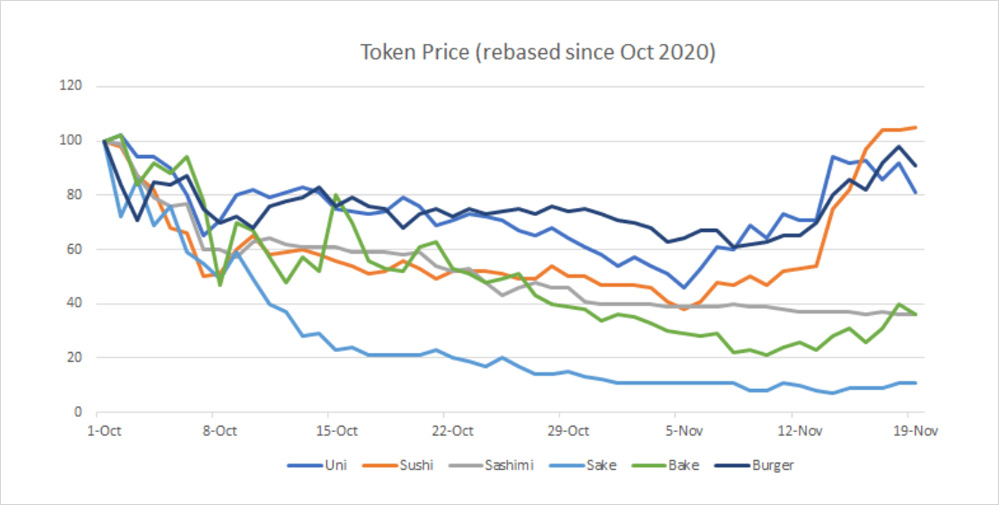 Fast forward 2 months, TVLs and valuations for these food coins have largely collapsed. Aside from SushiSwap, these copycat forks offer little in terms of product innovation or community engagement.

*As of 19 Nov 2020, on a best effort basis from Coingecko, Coinmarketcap and protocol websites.

It is no surprise that the market capitalizations of these forks have traded down in the last few weeks. Ponzinomics can only last so long before protocols run out of tokens to issue and normalized demand / supply fundamentals return.

It is fascinating to observe in real time how new competitive dynamics play out in the world of DeFi. Due to the transparency of open-sourced code, extremely low barriers to entry exist for vampiric forks. Whether they can remain competitive vs incumbents are a separate matter altogether.

For any protocol looking to succeed in this space, the following questions must be addressed:

Vampiric fork or not, the responses to these issues will determine the success or failure of each new entrant. That said, product innovation is a continuous process. To thrive in this landscape, a relentless dedication to product excellence is necessary. Builders can come from anywhere, using any method of launch. But the ones that last are laser focused on two things. Building a great product, and building a great community. We look forward to seeing more community forks come to market as ultimately, competition pushes the space forward.