In this week’s edition of Option Flows, Tony Stewart is commenting on The Attack on 30k BTC and much worry on Crypto Twitter.

After a dearth of activity, the attack on 30k BTC was the catalyst that initiated a surge in Option flow as both Shorts and new Fast money bought the July 23+30 30k Puts.
Much worry on CT however has been levelled at prints in BTC+ETH EOY 65-70% OTM Puts.
Let’s delve further: 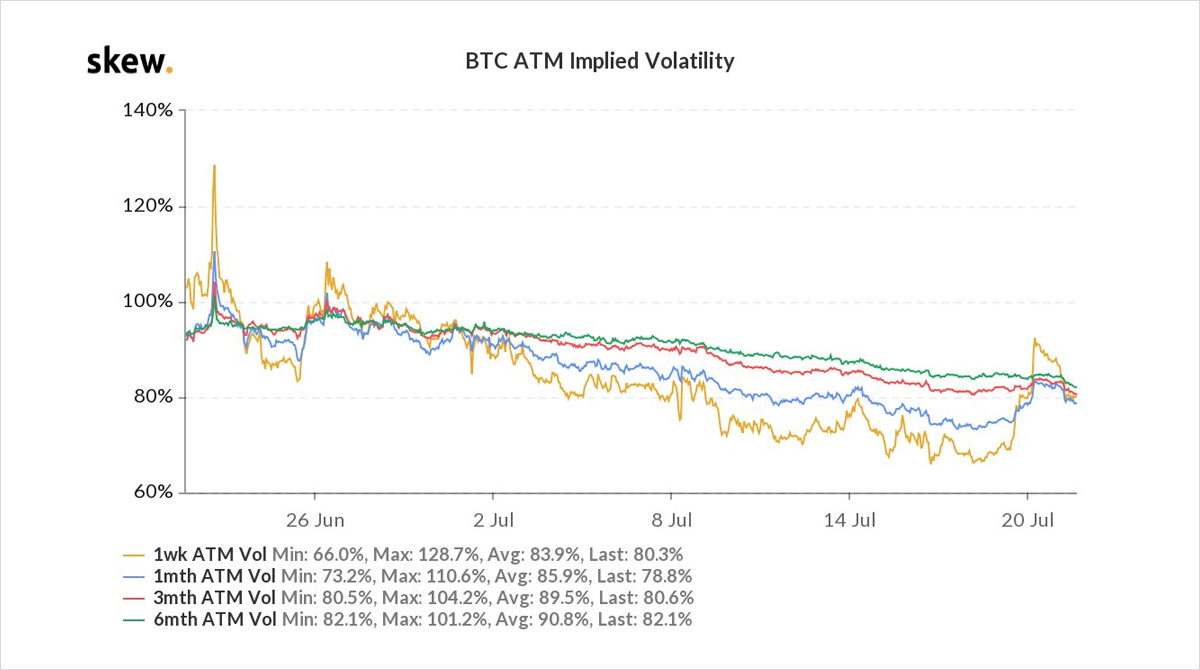 3) Note that longer-dated Implied vols continued to remain under pressure and longer-dated Skews were sub-0 for the Puts, making the case for longer-term bearish bias/concerns to take advantage of 6month OTM Puts.

4) While large prints in the current depressed volume environment, these purchases were absorbed by one MM seller.
Net delta ~400BTC, ~1500ETH that MM sold to hedge over 3days clips. Vega ~ 60% of ATM strike.
All very manageable.
The MM was aggressive to sell the flow and onside.

Highlighted above the technical reasoning for buying 6m OTC Puts on a relative basis, but this still has to fulfill the Put buyer’s bias.

The most likely justification is a medium-term -ve spot bias or crash protection view.

7) The current environment is one of regulatory & macro concerns, so the buyer may be ultimately comfortable in long spot or cash, but need longer-term crash exposure.
These Puts don’t work great on a slow drift lower.; they are also relatively expensive premium being Dec expiry.

8) Therefore:
– given the expense, likely crash Protection rather than punt; punts view logically in near-dated cheap premium Strikes.
– given the Strike, crash rather than drift exposure.
– given the Maturity, a medium-long term view.

This, of course, assumes justified logic.

9) Also the possibility of a structured product that uses 6month 65-70% OTM Puts to hedge/cover exposure.
Also perhaps that Buyer was a Fund buying back a short-vol position or (with OI increasing) entering a new Long.

Many possibilities; it seems disproportionate to overreact. 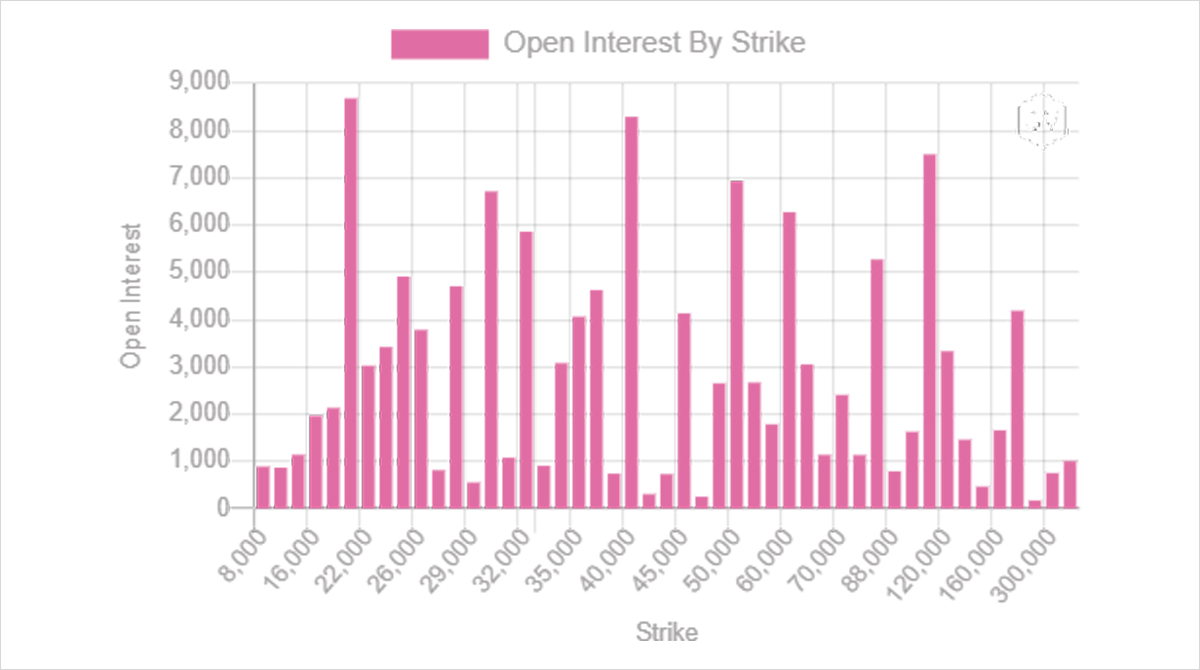 10) Finally, the IV reaction after today’s bounce off the lows is one where short-dated has not been hit hard and the front part of the term structure remains in backwardation.

This is perhaps ahead of the much-anticipated conf discussion with Elon, Jack (Twitter) & Cathie(Ark).

2) As opposed to the Dec Put buyer mentioned in the last thread, this Call buyer is making a short-term aggressive play.
The maturity and the delta of the Options have significant theta, so need imminent higher spot move to perform.
Smart purchase in terms of IV vega low point. 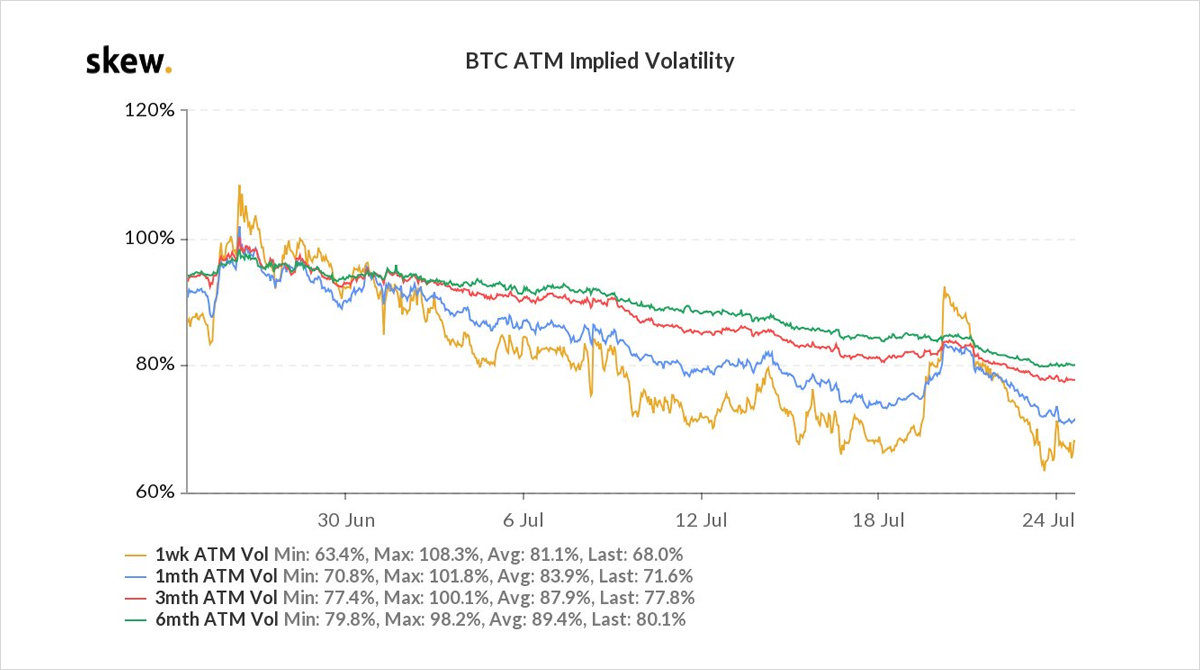 3) All executed via @tradeparadigm, the buyer bought over a couple hours, but spaced out in clips of no larger than x100.

Open interest data increased, so this was opening Longs. 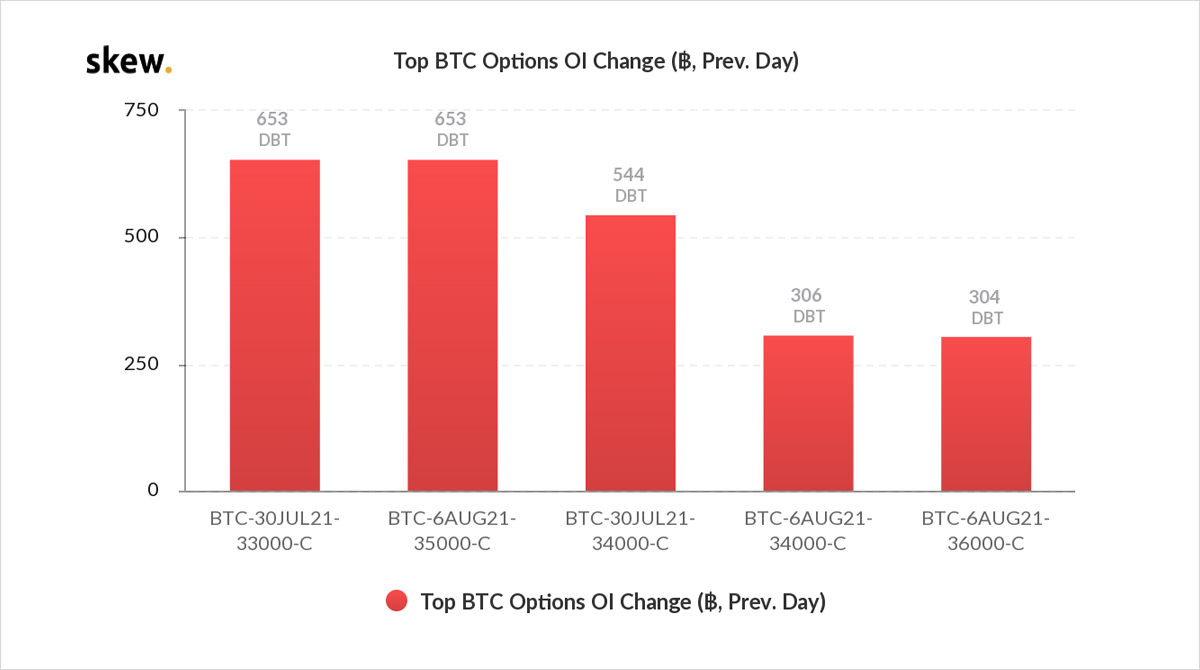 Buyer (almost certainly one Fund only) chose to block, not use screens, yet also chose not to buy the whole size exposure in one block (or 5×500). 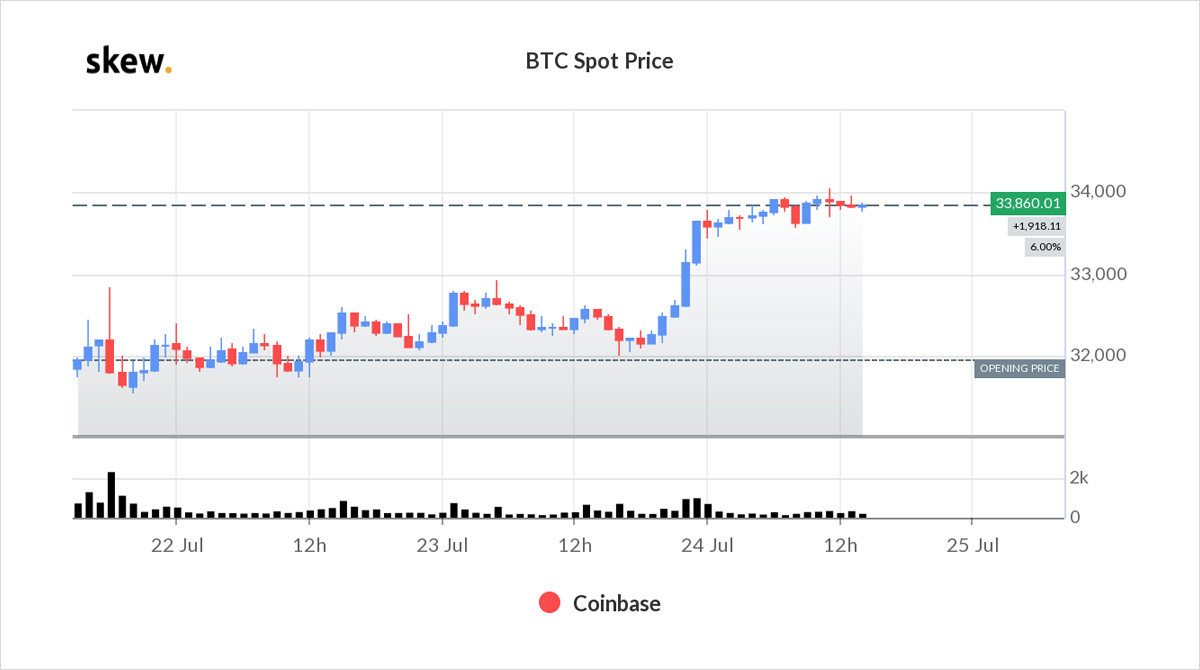 5) The buyer chose not to ‘marry’ with delta, so this is most likely a near-term bullish spot play, not a defined IV/gamma play.
But as the buyer accumulated, MM’s had to hedge and this ~1k of delta assisted the push up in spot and may have increased the speed of buying.

6) While the buyer didn’t choose the most liquid time of day to execute, the timing of IV low was precise. 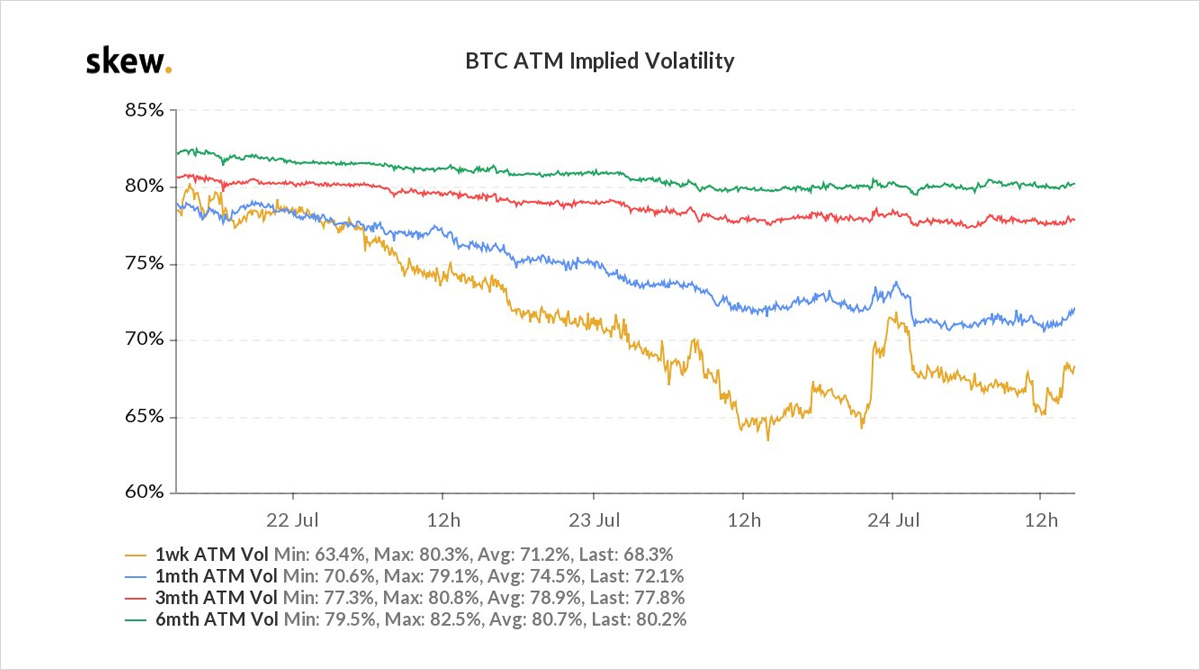 The market did not observe similar action on ETH Calls.

While the Term Structure has reverted Contango, if you look closely you can see remnants of the Call buying as July30+Aug6 are slightly elevated to a smooth curve. 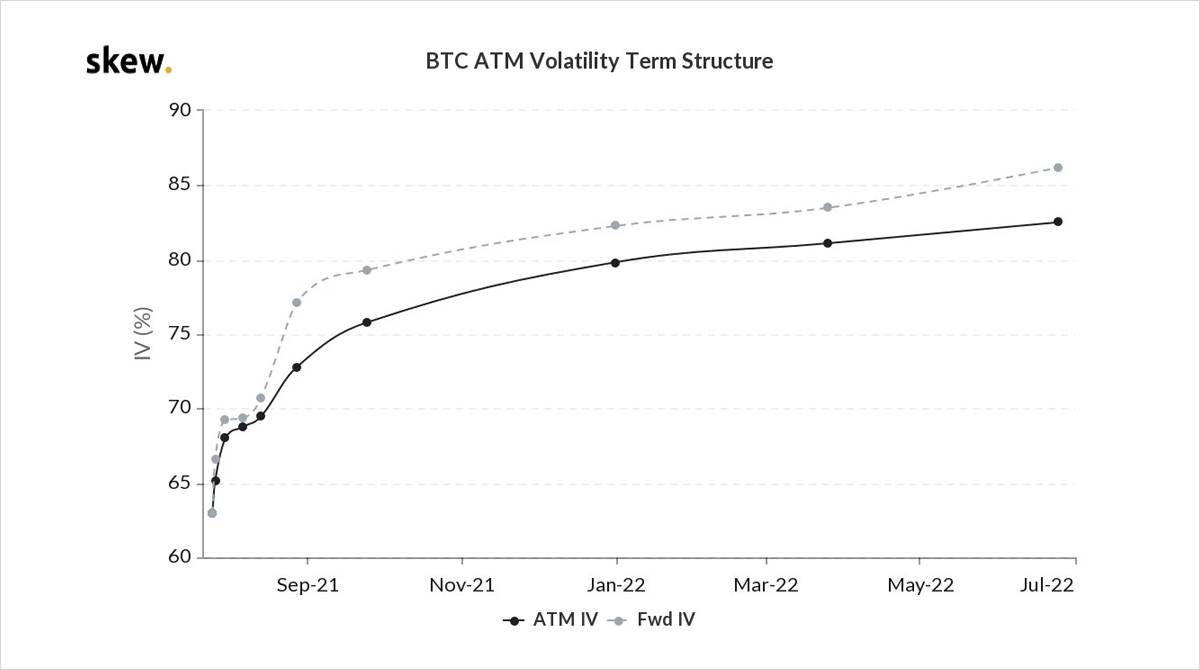